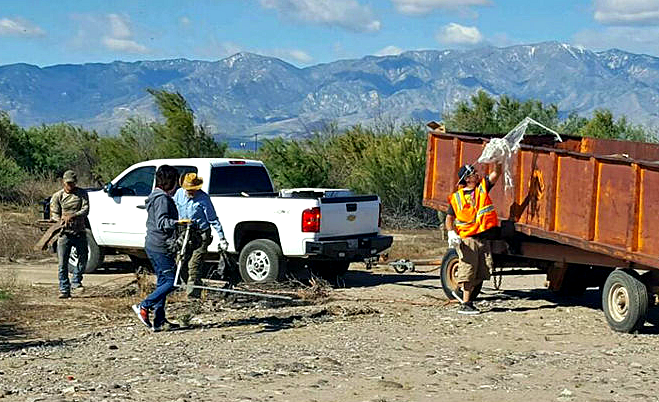 SAFFORD – “Never doubt that a small group of thoughtful, committed citizens can change the world; indeed, it’s the only thing that ever has.” – Margaret Mead

The nonprofit Make a Difference committee is working hard once again to bring the community together in an effort to clean up public land areas for Graham County’s bi-annual Make a Difference Day (MADD). Anyone interested in volunteering with the cleanup can meet with the group Oct. 22 at 6:30 a.m. at Glenn Meadows Park, located just south of Discovery Park Boulevard on 14th Avenue.

Vannessa Arbio, a resident of Vista Linda Estates, described her community’s interaction with the MADD group. She told Gila Valley Central that the estate’s community area was a place where children formerly came to play but has become neglected with age.

“Where the park once was is a large weeded dirt lot with broken equipment and no landscaping,” Arbio said. “The park used to be a fun place for all of the area’s children to ride their bikes to; some kids even a mile away. Our neighborhood is half nice, cared for homes but many houses (are) unclean and deteriorating quickly.”

Arbio told Gila Valley Central that the MADD volunteers worked hard to improve the area and even included the elderly so as to not single them out in the community effort.

“The Make a Difference Day was such a success for us the last time they came a couple years ago,” Arbio said.  “They cleaned out the weeds, picked up the trash, fixed a few things and had an inmate crew come clean our streets – complete with a street sweeper. It sure was cleaner and more beautiful around here for a while. We have a lot of elderly in his neighborhood who are incapable of cleaning their yards. As a neighborhood, we try to help but people often feel singled out this way. The MADD crew helps these people feel (like) part of a group. I sure wish we could get the crew here again.”

Nothing is required to volunteer with the MADD group. However, it is advised that any volunteer should bring a hat, sunscreen, gloves, and water.