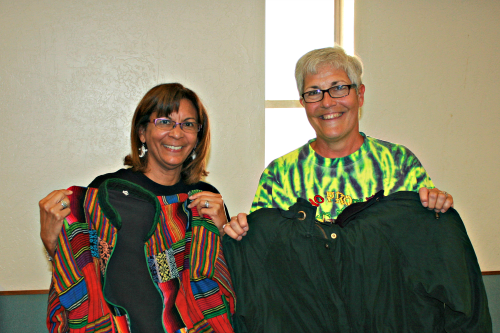 SAFFORD – When the weather turns cooler, even those living in the warm state of Arizona need a coat to keep away the nip of the cold.

The First United Methodist Church held its sixth annual coat drive on Friday to help everyone find a coat this winter. There were children’s jackets, baby coats, and adult coats as well. The coat drive was a work of multiple Christian denominations in the Gila Valley, who worked hard to collect coat contributions for those who needed them.

Reverend Sherry Brady, who helped organize the event, said that the First United Methodist Church had worked together with multiple other churches to create the drive.

“We have probably had this coat drive, which we have every October, for five six years in a row now,” Brady said. “I try to get the word out. I have ladies come in here and get coats for five kids,(and) I have single men come.”

There were at least six tables filled with neatly folded jackets and sweatshirts at the drive. The coats were separated neatly into piles for men, women, children and infants. Brady told Gila Valley Central that the coats were all donated by individuals within the community. However, Brady also said that there is an underlying sentiment that went along with the coat drive.

“I want people to know that, number one, we’re the hands and feet of Jesus Christ,” Brady said. “There’s a verse in James that says, don’t say be fed and be warm, and you don’t give them a coat or something to eat. What have you done? You’ve done nothing. This is part of walking your talk.  I want people to know that they can depend on Christians, especially from this church, that we’ll have something for them. But this is totally an interdenominational item.”

Brady also said that there are many people in the community wanting to share with others, but do not know the proper channels. However, some individuals didn’t have used coats to donate, so they bought new coats to contribute.

“I think people generally want to share and don’t know where to do it,” Brady said. “And this is an opportunity to get involved even though they don’t get a coat. We had a couple people that got brand new coats. We were getting them in the bag and putting them out and they had price tags on them.”