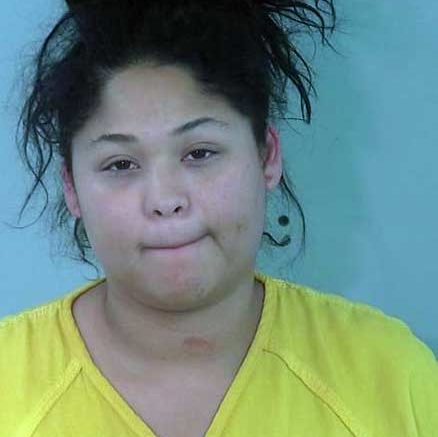 Contributed Photo/Courtesy GCSO: Samantha Tellez was booked into the Graham County Jail on two warrants after allegedly shoplifting from Walmart and running from the cops.

SAFFORD – Is this what Cyndi Lauper meant by “girls just want to have fun?”

Actually, Robert Hazard wrote that song and recorded a demo from a male point of view in 1979 prior to Lauper changing it into the feminist anthem released in 1983 – with Hazard’s blessing. But I digress.

Samantha Tellez, 24, was booked into the Graham County Jail for two misdemeanor warrants and was given a citation for shoplifting and trespassed from Walmart after allegedly stealing multiple items from the store and then fleeing from officers.

According to a Safford Police report, surveillance footage from Walmart shows three women, Tellez, Cassandra Anzar and Jovanna Nunez, enter Walmart at about 8:09 p.m. on Nov. 9. While in the store, Tellez was observed stealing numerous items, including a Razor hoverboard, four packs of batteries, a lantern, a spotlight and several items of clothing. The total amount shoplifted by Tellez was listed at $476.50.

Anzar was also located on video allegedly stealing a blue, Walmart recycle bag, fleece shirt, and a jacket. The total amount she allegedly stole was listed at $50.42.

The women were observed leaving the store in a grey, 2003 Chevy four-door Tahoe that is registered to Tellez, according to the license plate information.

At about 9:40 p.m., an officer located the Tahoe parked in front of Anzar’s residence in the 800 block of W. 13th Street. As the officer approached the vehicle, a marijuana pipe flew out of an open window and landed on the ground, according to his report. Numerous females then exited the Tahoe, including Anzar, Tellez and Nunez, along with three other women.

While the officer instructed the women to stay put, Anzar and Tellez went inside the residence and would later flee out a back window.

Inside Tellez’s abandoned vehicle, officers located the items Tellez stole from Walmart, with the clothing still having the price tags on them. All of the remaining women denied knowledge of the marijuana pipe. Nunez admitted going to Walmart with Anzar and Tellez but said she didn’t steal anything. Nunez was found to have already been trespassed from Walmart and was given a citation for trespassing. The Tahoe was impounded and towed from the scene.

Tellez later returned to Anzar residence and was arrested. Tellez allegedly admitted to the shoplifting and said she had fallen on hard times since she lost her employment and hasn’t been able to get a new job, so she “did what she had to do,” according to the report. She was then booked into the jail on her warrants for disorderly conduct and assault.

Anzar was contacted by phone and denied stealing anything from the store. She was advised that it was clear she had taken the clothes and was now trespassed from Walmart. The officer then sent his report to the city prosecutor for charges of shoplifting against Anzar.