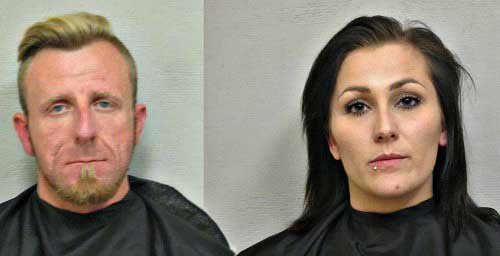 Contributed Photo/Courtesy Cochise County Sheriff's Office: From left, Andrew Hewit, 35, and Steevi Boerner, 28, were both charged with transportation of marijuana for sale after allegedly being pulled over with 120 pounds of pot.

Cochise County – Arizona is not a recreational marijuana use state, but these two didn’t get the memo.

A Gila Valley couple face stiff penalties after allegedly being caught attempting to smuggle 120 pounds of marijuana from Douglas back to the Safford area. The couple were caught after being pulled over Nov. 16 by an Arizona Department of Public Safety officer for a traffic violation, according to the Cochise County Sheriff’s Office.

Andrew Allen Hewit, 35, of Safford, was charged in Cochise County Superior Court on Nov. 22 with transportation of marijuana for sale and possession of a dangerous drug (methamphetamine). He was initially being held in a Willcox jail on a bond of $225,000.

The most recent incident involving Hewitt in Graham County occurred March 16, when a man overdosed on heroin in Hewitt’s home. According to the police report, emergency personnel arrived to see the overdosed individual in cardiac arrest. After medical personnel revived the overdosed individual, authorities arrived with a signed search warrant for Hewitt’s residence. The search warrant resulted in the arrest of all the individuals in the home, and Hewitt was given multiple charges, including possession of a dangerous drug (methamphetamine), and possession of drug paraphernalia.