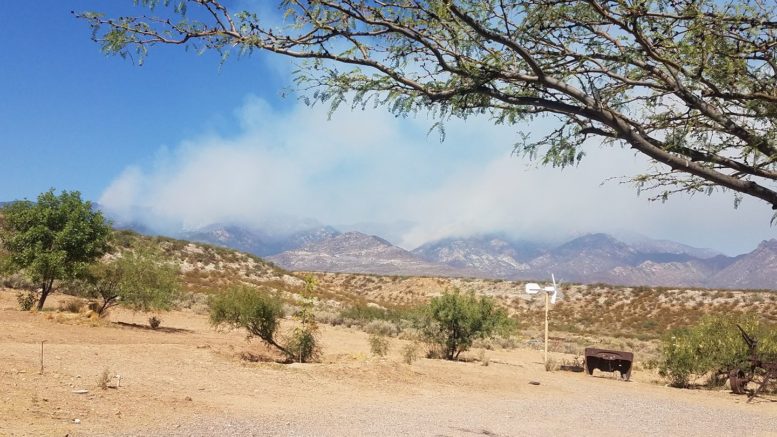 Contributed Photo/Courtesy Marie Yapp: Smoke from the Frye Fire is seen Saturday morning as it continues its southward expansion.

MOUNT GRAHAM – Structure protection of the 74 cabins at Turkey Flat remain a major focus for firefighting efforts as the Frye Fire has now come within one mile of the area.

As of Saturday morning, the Frye Fire was listed at 42,755 acres with 45 percent containment, with most of the contained areas being on the northern side that has mostly burned out.

Jon Johnson Photo/Gila Valley Central: Most of the Frye Fire’s activities are now on the southern side.

The Forest Service used aerial ignitions Thursday and Friday on the southeast side of the fire in an attempt to minimize the intensity of the fire and stall its terrain-driven growth, according to a news release.

The weather isn’t helping, with hot, dry and blustery conditions blowing the fire into new fuel areas. On Friday, the fire moved down Noon Ridge and Grapevine Canyon and “made a significant run” up Pitchfork Canyon and into Wet Canyon, according to the release. The fire has also headed into several drainages on the west and southwest side, including Hell’s Hole and Jesus and Goudy Canyons. 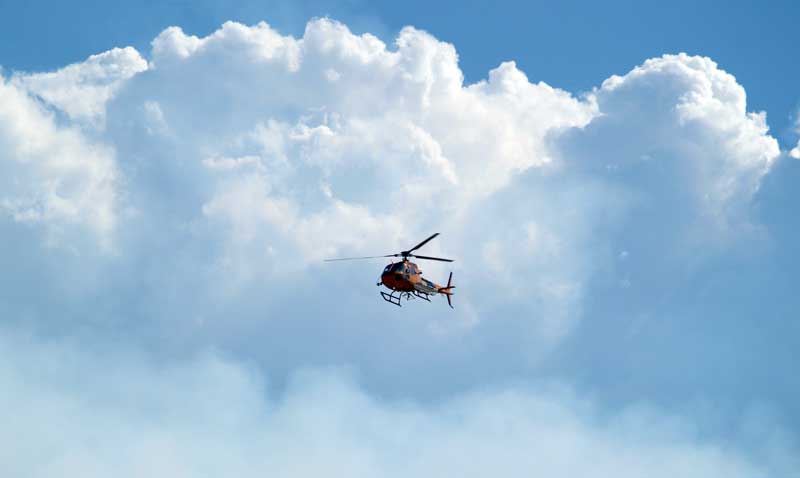 Along with the aerial ignitions, helicopters have continued to provide suppression assistance with bucket load after bucket load of water sucked up out of Riggs Lake and Cluff Ponds.

Additionally, 50,000 gallons of water has been delivered to portable storage tanks for the sprinkler system at Turkey Flat. The system is designed to run by itself in the case firefighters have to be pulled out of the area due to oncoming flames. It is one of a variety of structure protection techniques being utilized in the Turkey Flat area as the fire makes its way toward the cabins.

The Frye Fire was started by lightning June 7 at about 2:45 p.m. and has cost roughly $15.7 million to fight to date. So far only one structure has been lost, the water chlorinator shed at Old Columbine, and one structure damaged, the Webb Peak Lookout Tower, both of which occurred June 19. It’s current listed full containment date remains as July 30.