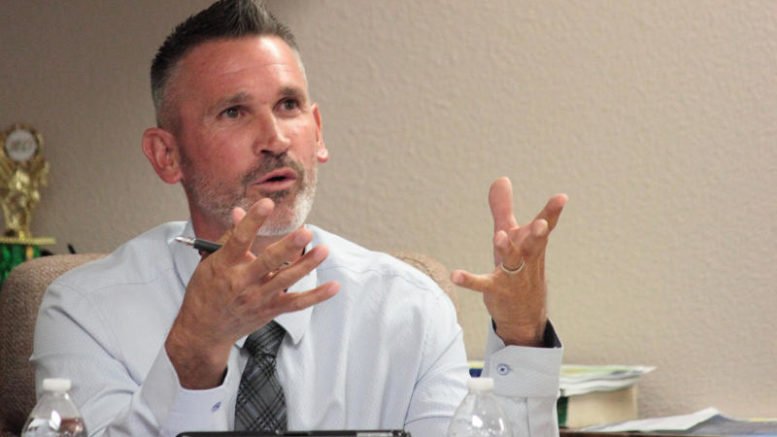 File Photo/Gila Valley Central: Jason Kouts suffered a broken shoulder blade after suddenly passing out and falling from a stool during a church rehearsal Tuesday night.

SAFFORD – On Monday night, Safford Mayor Jason Kouts questioned aspects of the Frye Fire’s early management, asking at the Safford City Council meeting if resources were correctly allocated and if back burns were appropriately handled. Incident commander Greg Poncin and his Type 1 team took command of the fire Sunday evening, so, while he was able to speak to current fire conditions, he was hesitant to speak about previous management.

Poncin told the council that the Frye Fire will continue to grow but his team is working to protect property while minimizing the danger to his crews.

“What we’re trying to do is maintain a low-intensity backing fire,” Poncin said. 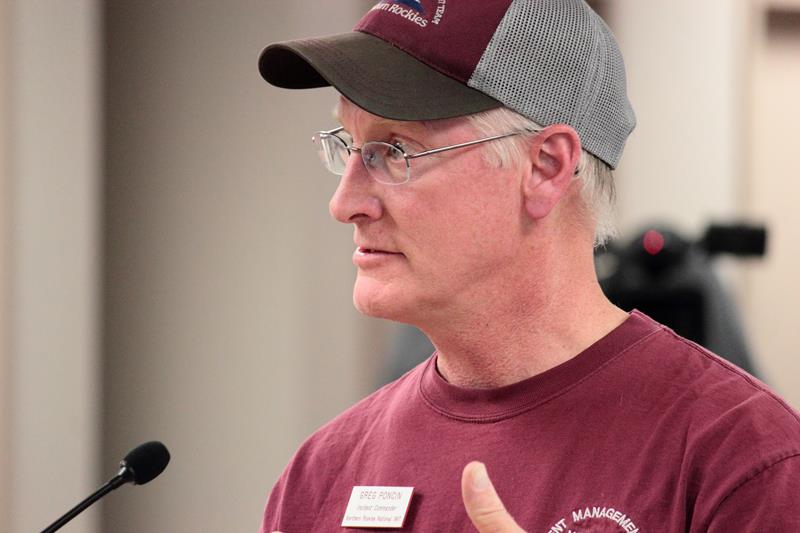 Kouts questioned Poncin closely about how much information had been passed on from the previous management teams. Kouts focused his questions around the issue of back burns, particularly a method called firing operations, where a helicopter fires ping-pong-sized chemical balls in narrow strips on a hillside. As the balls leave the helicopter, a second chemical is injected, triggering a hot reaction that then starts fires in narrow strips in the target area, ahead of the main fire. When the more intense main fire travels uphill, it encounters the burned areas and is prevented from traveling further uphill, creating the low-intensity fire Poncin mentioned.

“I was just concerned of the back burns and how they got away,” Kouts said on Tuesday.

Poncin was unable to comment on how previous management had handled the fire. Kouts said he believes that all firing operations have to be supported by a ground crew, and that all the crews on the ground have to coordinate where the fire will be placed. Mike Cole, public information officer for Poncin’s team, told Gila Valley Central that yes, ground crews determine where a defensible point is and hold their position there.

Heidi Schewel, spokeswoman for the Coronado National Forest, said those determinations are made on a case-by-case basis. While neither Cole nor Schewel could comment on whether the firing operations had been managed properly, they did note that after the fire is complete, there will be an official, public assessment of all action taken by management and the crews.

This video from September 9, 2016, shows water rushing down the canyon into Frye Mesa Reservoir after a rainstorm.

Kouts also asked Poncin if he knew of any aerial firefighting resources available in the early days of the fire that were not used, but Poncin did not have that information. Although aerial resources have been used since the beginning of the fire, Schewel said it is a misconception that aerial firefighting alone could have extinguished the fire even when it was small.

Eric Burk File Photo/Gila Valley Central: This vertical panorama shows the falls immediately above Frye Reservoir as they appeared July 13, 2015. The Frye Fire threatens wildlife populations in and around the creek, and resultant floods may damage the reservoir.

Kouts understands that some fire is helpful to reduce fuel loads and manage intensity of future fires, but he also wants to see more grazing and a return to logging to lower fuel loads. Kouts is concerned that the fire will be ecologically damaging, and may cause floods to damage Frye Mesa Reservoir. Kouts plans to ask for federal aid to clean up damage to the reservoir.

Lance Koch, biologist for the Safford ranger district of the Coronado National Forest, said it was possible the effects from the fire could harm endangered species, such as Apache and Gila trout in Frye and Ash Creek. Koch said that while the ecological affect of the Frye Fire is unclear, the Nuttall Complex Fire of 2004 reduced the endangered red squirrel population by two-thirds. How much harm is done by the Frye Fire depends on how much spruce fir and mixed-conifer forests experience low-intensity ground fires vs. canopy fires.

Kouts said he was surprised that none of the incident management teams had held information meeting exclusively with the mayors and county supervisors of the Gila Valley.

“I have never personally been invited to come to a special briefing.” Kouts reasoned, “We’re the ones who have to hear from the constituents, they get our cellphones, they just call us 24 hours a day, several days a week. I was a little shocked at (the lack of government-only briefings).”

After the fire is over, Kouts expects recreational use of Mount Graham to resume as the mountain recovers. 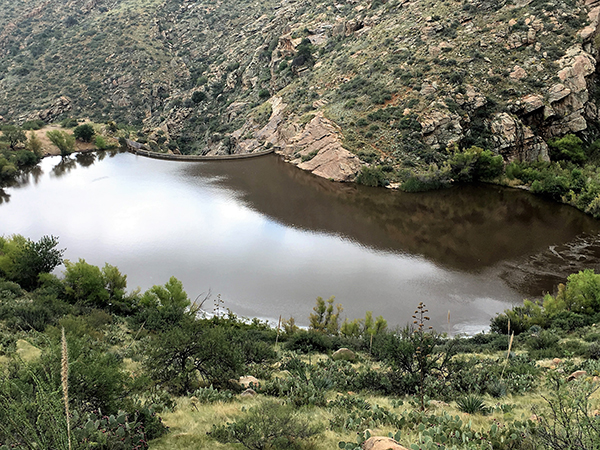 Jon Jonson File Photo/Gila Valley Central: Frye Mesa Reservoir was filled to the brim due to the water runoff from Mount Graham in this September 9, 2016 photo. Biologists are worried about what runoff from monsoon rains after the Frye Fire will do to the area and its endangered Gila trout.

“I don’t know that it’s going to have a big effect on (Safford’s economy), it’s just sad to look up and see rocks instead of trees.”