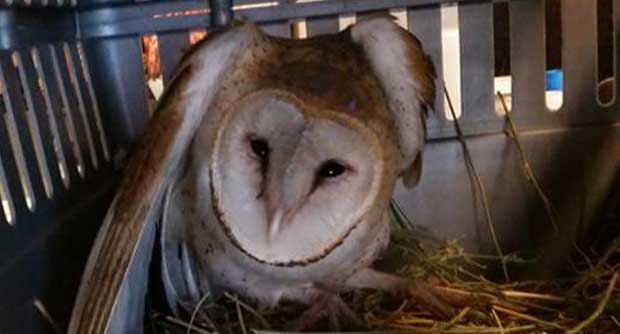 Contributed Photo/Courtesy Emily Rhinehart: This owl had a broken wing.

Graham County- With the Frye Fire listed as the 14th largest in Arizona’s history, many locals wonder what will happen when displaced wildlife wander into populated areas.

“I think they’re going to run from the fire but they really can’t stay in someone else’s territory because the animal that owns the territory is going to defend it,” Bates said. “There are limited resources and they’re not going to let everybody move in. Once their territories are burnt up, they are going to try to come down. They’re already coming down just from the drought. The drought is a huge problem and now the fires will be a problem. And they’re going to be looking for food.” 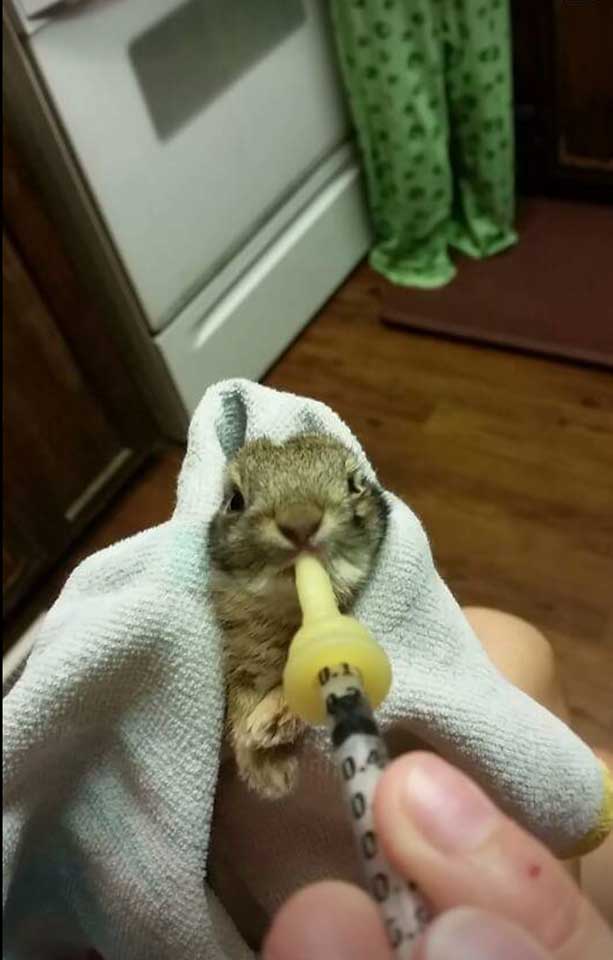 Contributed Photo/Courtesy Emily Rhinehart: This baby chipmunk had to be bottle fed until it was ready to be released into the wild.

Because of displaced predators from the mountain, Bates warned Gila Valley residents to supervise their pets and livestock as if they were children and to be certain that chicken coops had roofs. Also, Bates said if that an individual finds an injured or diseased animal, to call the Tucson Wildlife Center as quickly as possible. However, unless the animal is hurt, it is best to leave them alone.

“We’ll come up (to the Gila Valley) if it’s a big animal, and if it’s a small animal we might ask you to box it up and meet us half way because it’s a long drive to Tucson,” Bates said. “We have a wildlife hospital and we have a veterinarian who can treat the animals.”

Bates said the Tucson Wildlife Center will take in every type of animal, and that none will be turned away. However, Bates also suggested that because of the excessive heat of the summer, individuals who might want to help might place water outside for dehydrated wildlife.

“We do recommend putting out water for the drought and heat when it’s excessively hot when they’re seeking shade,” Bates said. “It doesn’t hurt at all to give them some extra water because we’re getting them in here really really dehydrated when they’re just about to die. A little bowl of water doesn’t hurt a bit and it’s not illegal.”

If anyone would like to assist the wildlife further, Bates said that even though the Tucson Wildlife Center is more than 20 years old and will be housing 3,000 animals this year, they are always looking for volunteers.

“We need a transporter because of Safford and Thatcher and that area anywhere up in Duncan, we go there too,” she said. “If we can get any help from transporters, or volunteers to help transport injured or orphaned wildlife to Tucson to our Wildlife Center and back, that would be great. If we can heal them, we release them. Because that’s our goal, to heal them and release them as soon as possible.”

During a recent community meeting on the Frye Fire, however, Safford district Fire Management Officer Everett Phillips said the majority of the fire was either low-intensity or moderate-intensity and that he has already seen animals returning to burned areas and feeding through the ash.

Phillips also reported that fire officials have not come across any dead animals relating to the fire as of yet and the Forest Service showed multiple pictures of animals taken on Mount Graham on July 4.

“You saw the picture of the turkeys here and there,” Phillips said. “Turkeys love black. They can get to the bugs a lot easier. Deer are already back in the black walking through it and stuff. Until we can get more eyes up there and get poking around . . .  they are still up there. They are not really coming down off the top much.”

Phillips added that a contingent of biologists from the University of Arizona are scheduled to visit the area Monday with radial telemetry tracking devices in tow to attempt to determine what kind of impact the fire has had on the endangered Mount Graham red squirrel.

Emily Rhinehart, a Thatcher resident, and owner of the Affordable Furniture and Mattress Gallery has been working with wild and domestic rescue and foster for years. Rhinehart is one of the individuals in the community who will transport wild animals to Tucson clinics and even house and feed them, if necessary. Gila Valley Central contacted Rhinehart to find out about recent rescues and what the community may expect in the near future.

“I have not noticed an increase in animals needing rescuing since the fire,” Rhinehart said. “I feel like we will see a late effect with this. Perhaps once they have all fled the actual fire, they will attempt to return once it’s safe, with nowhere to live. I suspect then, we may start seeing some wildlife in need.”

When asked why she entered into the time-intensive and demanding volunteer work of animal rescue and foster, Rhinehart said she had worked with animals for years. However, over time and through word of mouth, she became one of the multiple individuals within the community that helps re-home injured, lost and abandoned animals.

“Somehow, they always find me,” she said. “The choice I make is to help, to advocate and to take the time to research and network these animals. I choose to be compassionate and not turn them away.” 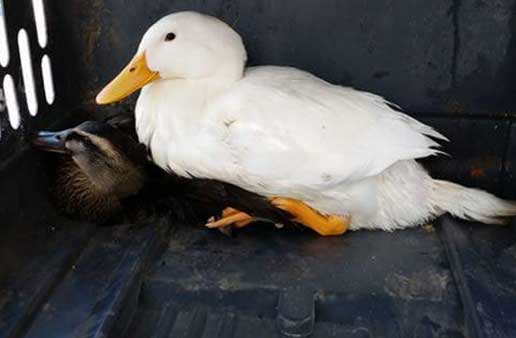 Contributed Photo/Courtesy Emily Rhinehart: These ducks were found with broken legs, and were eventually brought back to the wild.

When asked what happens in the case of a wild animal rescue, Rhinehart told Gila Valley Central that she does an abundant amount of research and asks for information regarding the animals’ location and condition.

“Usually when I get calls, I ask for information about where the animal was found, the condition the animal is in, and I request pictures,” Rhinehart said. “It gives me a better understanding of what I’m going to be dealing with. Once I see pictures and hear the back story, I instantly go to work on finding a rescue or a rehabilitation center. Often times I am able to have something set up before I even receive the animal.”

Of all the animals that Rhinehart has worked with, she said birds are by far the hardest to keep alive and transport.

When asked what she would tell someone who has found an injured animal, Rhinehart said to abstain from feeding it.

“I suggest not to feed it,” she said. “Sometimes feeding or forcing water to a wild animal can kill it. It’s very important to find a rescue or someone who can get the animal to one right away. Time is of the essence. It’s incredibly important to get the animal into the proper hands versus keeping it and trying to care for it on their own.”

For more information or to report an injured animal call: