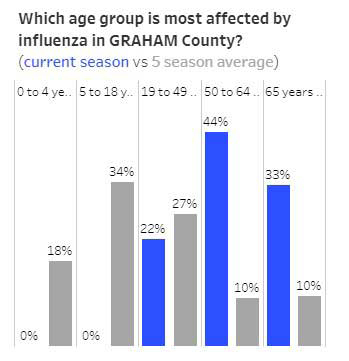 SAFFORD — This year’s flu season in Graham and Greenlee counties continues to be among the lowest on record.

Through the week of March 6, Graham County has just nine confirmed cases of influenza, which is 96.2 percent below the five-year average of 232 at the same time.

Five of Graham County’s cases are Influenza A, three are Influenza B and one is undetermined. Two people who have tested positive for flu are between the ages of 19 and 49, four are in the 50- to 64-year-old age range and three are over the age of 65.

In Greenlee County there remains just one case, which was discovered the week of Feb. 6. It’s a case of Influenza B in a person over the age of 65.

Statewide, there have been just 850 cases of flu so far this season, 96 percent below the five-year average of 20,935 cases by the week of March 6.