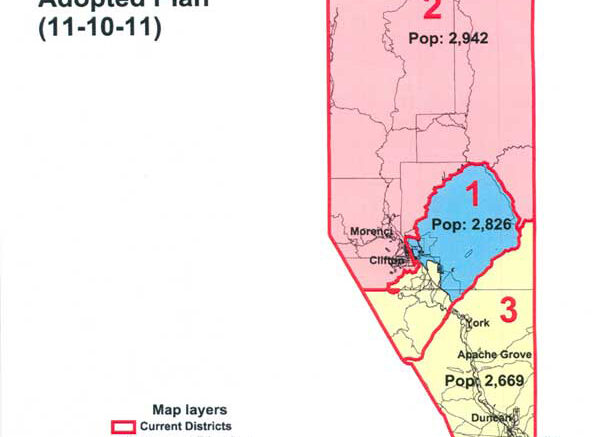 During the last redistricting in 2011, Greenlee County's Dist. 3 grew due to population shifts in Clifton and the southern portion of the county. - Contributed Graphic/Greenlee County

CLIFTON — Following the last few Census counts, Greenlee County used the consulting firm Research Advisory Services, which was headed up by Tony Sissons, to handle redistricting of the supervisors’ districts.

However, Sissons died in December, leaving most of the smaller counties in Arizona empty-handed when it comes to the redistricting process.

“I’ve talked to a couple of other consultants in the area, and visited with some of my counterparts in other counties, and I’ve felt like the best course going forward would be to simply put out a request for proposal and find out what’s out there,” said Derek Rapier, Greenlee County administrator.

“It would be taxing on our capacity in normal times, but in normal year after Census, we have our data by the end of March. In fact, the federal law says that it’s supposed to be presented to the states on April 1,” Rapier said. “Unfortunately, for a variety of reasons — some political and some process — they are not going to have the data until about the end of September, six months late.”

Meanwhile, Arizona law requires the county boards of supervisors to approve redistricting plans by Dec. 1. Given the short window to process the data, Rapier recommends contracting with a firm to handle the redistricting process.

The Board of Supervisors voted unanimously Tuesday to issue the requests for proposals.