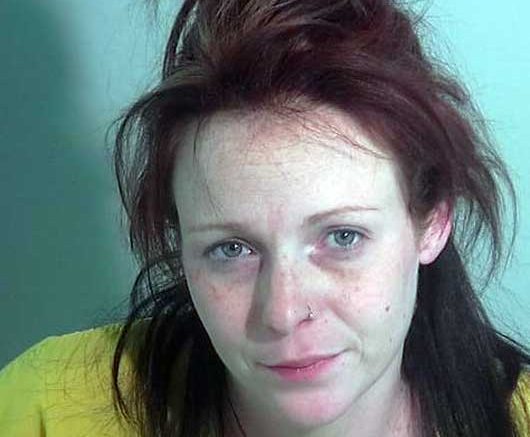 Contributed Photo/Courtesy GCSO: Judith Freestone was booked on several warrants and new charges after allegedly shoplifting from a gas station and resisting arrest.

SAFFORD – A wanted felon with several misdemeanor and felony warrants for her arrest was captured and given additional charges early Monday morning after allegedly stealing grocery items from a gas station.

A Safford officer was dispatched to the Giant gas station at 105 E. U.S. Highway 70 at about 2:49 a.m. regarding a theft. The store clerk informed Graham County Dispatch that she had witnessed a woman put items into her purse and then go into the restroom. The clerk also advised there was a white car by the gas pumps that was waiting for the woman.

Upon arrival, an officer noticed a white car and came upon a red-haired woman who appeared to be startled when she noticed the officer. As the officer spoke with the clerk, the woman, later identified as Judith Eve Freestone, 26, got into the passenger side of the vehicle and the car sped away.

The officer attempted to catch up to the vehicle, which was traveling at a high rate of speed, according to his report. By the time the officer located the vehicle, it had parked at 909 S. 3rd St. and the male driver was walking into a residence.

At that point, Freestone complained that she was injured. Paramedics arrived at the scene and deemed her safe to be transported to the hospital by the officers.

Freestone was then evaluated and cleared for jail at the Mt. Graham Regional Medial Center. She was then booked into the jail for four misdemeanor warrants, two felony warrants, and new charges of shoplifting, false reporting to law enforcement and resisting arrest.