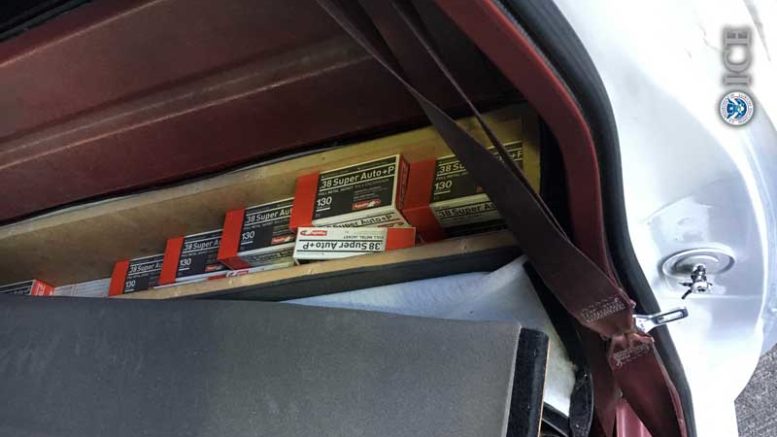 A Mexican national was apprehended attempting to smuggle 7,000 rounds of ammunition into Mexico.

TUCSON – A Mexican national was arrested Monday for allegedly attempting to smuggle more than 7,000 rounds of ammunition into Mexico following a probe by U.S. Immigration and Customs Enforcement’s (ICE) Homeland Security Investigations (HSI) with assistance provided by the Bureau of Alcohol, Tobacco, Firearms and Explosives (ATF).

Eduvier Navidad-Vizcarra, 22, was booked into the custody of the U.S. Marshals Service based on charges detailed in a federal criminal complaint which accuses him of attempting to illegally export goods from the United States.

The investigation leading to Navidad’s arrest began Saturday after HSI special agents received information regarding a large load of ammunition possibly destined for Mexico. The investigators immediately initiated surveillance, which eventually led them to a Tucson residence where they observed the defendant loading and unloading boxes into a compartment behind the seat of his pickup truck. Once the boxes were loaded, Navidad drove toward Nogales. As he approached the port of entry, Navidad abruptly began taking evasive action. Federal special agents pulled over the truck and took Navidad into custody. A search of the concealed compartment behind the seat of Navidad’s vehicle resulted in the recovery of more than 7,000 rounds of ammunition, which subsequent investigation confirmed was destined for Mexico. Authorities have seized the vehicle and ammunition.

“One of HSI’s top enforcement priorities is preventing ammunition from falling into the hands of those who might seek to harm innocent people,” said Scott Brown, special agent in charge of HSI Phoenix. “Those whose attempt to illegally export ammunition to Mexico should be on notice, HSI will continue to work closely with its law enforcement partners to combat this threat and hold the perpetrators accountable for putting our communities at risk.”

The charges contained in the criminal complaint are merely accusations, and a defendant is presumed innocent unless and until proven guilty.

If convicted, Navidad faces a possible sentence of 10 years in federal prison. The case is being prosecuted by Assistant United States Attorney Angela W. Woolridge.