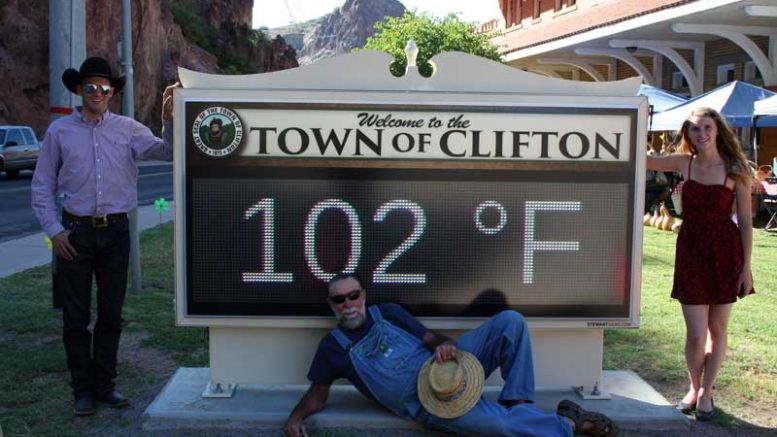 Photo By Gualterio Casias: A new marquee has been installed at the historic Clifton Train Station. One of its popular features is posting the outdoor temperature, especially during the current excessive heat wave in which temps are well-exceeding 100 degrees. The marquee also carries several messages and will carry more, for a fee, in July. Posing with the marquee are vendors at the weekly Clifton Farmers Market. They are, from left, Ben Menges who sells home grown beef; Master Gardener Bill Cook, who has a variety of plants available, and Dahlia Stacy, who provides home-baked good and home-made clothing items. They are among the several vendors at the market held every Wednesday at the train station.

CLIFTON – To say it was ugly is probably an understatement. Thankfully, the gaudy orange and white marquee that sat in front of the Clifton Train Station is gone. Now, a handsome marquee has been installed there  and it does more than tell who is doing what and when. Visibly it blends well with the historic train station.

The marquee is electronic and carries several messages. One already popular feature of the marquee is that it gives the outdoor temperature. It lets those who pass by track the excessive heat wave that has hit the area. One marquee message tells of an excessive heat warning. That is of particular interest as temps have far exceeded 100 degrees in the past couple of weeks. On Monday, June 19, at 3:30 p.m., the daytime high was 111 degrees. A cloud cover moved in shortly after and at 5:30 p.m., according to the marquee, the temperature had dropped by 16 degrees to 95.

A man who recently moved here from Michigan was standing  by the marquee when it registered 111. He laughed as he referred to the high temperature as being “hotter than Dutch love.” He said it is a common expression in Michigan where there are many people of Dutch descent.

Other primary uses of the marquee include announcing upcoming or ongoing community events. For instance it gives the hours the Clifton Splash Pad or the Town Hall is open. It carries a message about the weekly Clifton Farmers Market, held each Wednesday, and what goods can be had. There was even a special message prior to and on Father’s Day last weekend. In addition, it discourages motorists from driving and texting, which is illegal in Clifton.

One of the marquee’s important features is that it will carry information on emergency situations that may occur. Mayor Felix Callicotte pointed to the marquee’s use for relaying information to the public about flood threats in this flood-prone town, through which the San Francisco River runs. That includes Ward’s Canyon, being closed due to flash flooding, which is a regular occurrence when heavy rains hit. A flood wiped out part of the town in 1983 and there have been several flood threats since.

“With a new electronic LED sign, the town is able to post multiple messages at a time,” Town Manager Ian McGaughey said. “Plus, we can update the sign instantly via the web — an important consideration in the event of an emergency. The town of Clifton would utilize the sign for emergency communications, important community updates/reminders, important messages for our community partners (nonprofits, utility companies, FMI, etc.) as well as allowing community members to purchase time and space on the marquee for personal messages. The town has been researching and implementing different methods of communication for emergency events, as well as important safety information for our community, and feel this electronic sign is an excellent way to convey information to the public.”

The town manager said the marquee was purchased from Stewart Signs for $24,000 after a competitive bidding process. Freeport-McMoRan, Inc. contributed to the purchase of the marquee with a grant of $8,000.  Callicotte expressed the town’s gratitude “for Freeport’s generous contribution to this important project.”

The installation took place over a period of two weeks, and was completed Friday, June 9, when it was successfully fired up for the first time. The marquee’s messages are controlled at Clifton Town Hall.

“We’re very pleased the sign has generated so much positive feedback, and I think it compliments our historic train depot very nicely,” Callicotte said.

“Please note that we are still in testing mode and will begin taking reservations some time in July for those seeking to have messages included on the marquee,” McGaughey asid. “We’ll post on the marquee when we’re ready for sign reservations.”

The following are fees for reserving the marquee once it is ready.

Monday – Thursday $10 for message, $5 additional for image when available.