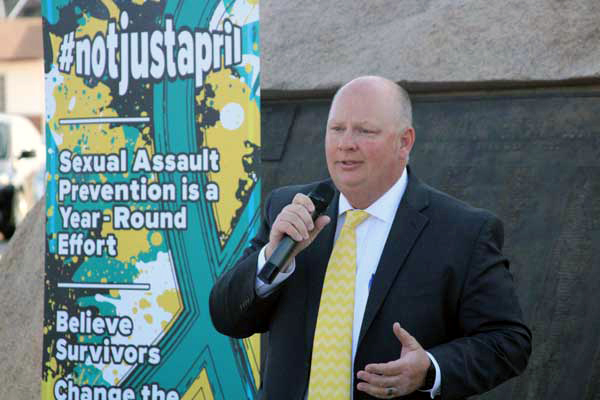 Graham County Attorney L. Scott Bennett talks during April's Crime Victim Awareness event. Bennett said his office is in receipt of the findings of an FBI investigation involving the Town of Pima, but the County Attorney's Office has not yet decided on a course of action. - David Bell Photo/Gila Valley Central

PIMA — An investigation by the FBI involving the Town of Pima has taken place, but what that investigation centers on has not yet been made public.

During Tuesday’s Town Council meeting, Pima resident Lois McLellan inquired on the status of the investigation, and asked if council members and town staff had seen the report.

Town Manager Vernon Batty said nothing could be disclosed at this time.

In an e-mail to Gila Valley Central, Graham County Attorney L. Scott Bennett said, “I can confirm that I have received a report from the FBI that stemmed from an investigation that they conducted. As I have not made a determination as to what, if any charges will be filed, I am not comfortable releasing the subject of the investigation.”

Bennett did not offer a timeframe on when he would make a decision on what steps he would or would not take as a result of the report.

Council members acknowledged reading the FBI’s findings, and Councilman C.B. Fletcher said members of the public “would have to talk to the FBI” about learning what is in the report.

“We tried, believe me,” Fletcher said. “It took us almost a year to get the computer back that we use here in the office every day.”

The first time an investigation was intimated was in late summer of 2021, when memos were circulated in Town Hall concerning investigations by law enforcement.