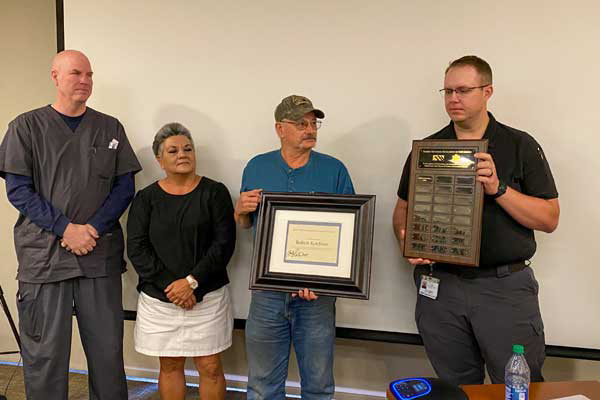 MGRMC RN Kyle Lines, right, shows the plaque that will be displayed in the Emergency Room with the names of the recipients of the Robert Ketchum Excellence in EMS Award. Ketchum, second from right, shows the award named in his honor. Joining in the award ceremony were, from left, Clay Hargis, DO, and MaryAnn Mendoza, EMT. - Contributed Photo/MGRMC

SAFFORD — It’s a big thing to win an award; it’s an even bigger thing to be the first to win that award.

Robert Ketchum experienced the biggest thing of all when, after receiving his award, he learned the award was being named after him.

On Thursday, the Mount Graham Regional Medical Center Trauma Program presented the inaugural Excellence in EMS Award to Robert Ketchum for recognition of his life-saving efforts in prehospital trauma care, serving the citizens of Graham and Greenlee counties.

Upon receiving his plaque, hospital staff informed him the award will hereafter be known as the Robert Ketchum Excellence in EMS Award.

Going forward, MGRMC Trauma Program will annually present the award to a local EMS provider. Each recipient will receive an award, and the person’s name will forever live on a plaque in the Emergency Department.