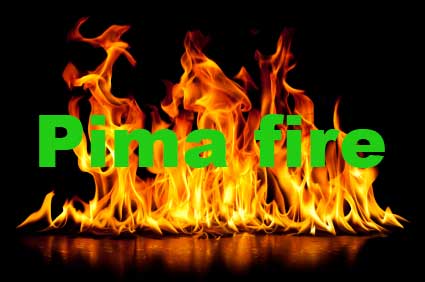 An electrical issue was listed as the cause of a mobile home fire near Pima on Friday.

PIMA – An electrical fire was fingered as the culprit of a fire early Friday morning that wiped out a mobile home residence on Cottonwood Wash Road.

Authorities and firefighters were dispatched to the blaze at about 6:23 a.m. and arrived to see a fully engulfed structure. Firefighters from Pima and Thatcher worked to keep the fire to the residence, but the structure itself was deemed a total loss.

A resident of a recreational vehicle that was parked to the north of the burned home said he had left to go to the convenience store in Pima at about 5:30 a.m. and did not notice anything awry. At about 6:20 a.m., however, he lost electricity to his RV. Upon investigation, he saw the shed of the mobile home where the washing machine and dryer were was on fire.

The man alerted the two male occupants of the residence and they, along with most of their pets, made it out unscathed. The man acknowledged some of their birds that were in the eastern side of the residence did not make it out in time.

One of the residents told a deputy that he saw his lights flicker and then shortly thereafter heard the men yell that the house was on fire.

Pima Fire Chief Adam Hoopes investigated the scene and determined the cause of the fire to be faulty electrical wiring, according to the Sheriff’s Office report. Hoopes added that the fire appeared to have started in the laundry room.

The mobile home was burned throughout with the laundry room completely burned down, including its roof.

Occupants finger each other as driver in car crash, neither get the blame