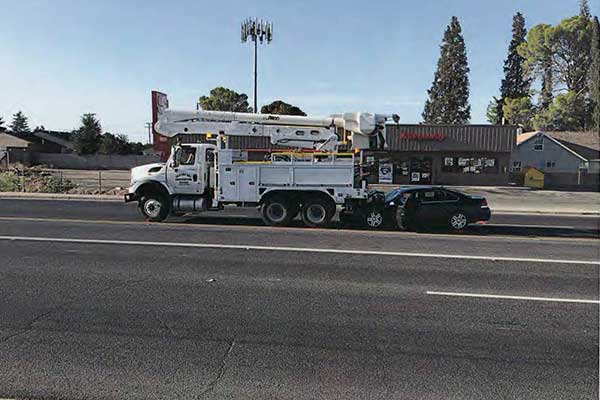 SAFFORD -A traffic fatality closed down Highway 70 in both directions early Sunday morning from 4th Avenue to the area of 1st Avenue.

A construction crew, driving three separate vehicles were on their way to a job site, which was just a few block away from where the collision occurred. Two of the vehicles were large construction trucks. One of the trucks stalled out just after turning onto Highway 70 near 1st Avenue. The truck was in the inside lane of eastbound Highway 70. The other large truck pulled up behind the stalled truck and turned on his hazard lights. The construction crew was unable to get the truck started so another truck pulled in front of the stalled truck to pull it out of the way. At approximately 6:30 a.m.,j ust as they hooked up the tow strap to move the stalled truck, a passenger car came through the intersection and ran into the back of the truck behind the stalled truck.

Witnesses said that Pena came through a green light, but never tried to brake or slow down. According to witnesses and the people who pulled him from the vehicle, Pena was not wearing a seat belt. Pena was transported Mount Graham Regional Medical Center where he was pronounced deceased at 7:06 a.m. According to the medical examiner the cause of death was traumatic injury to the chest.