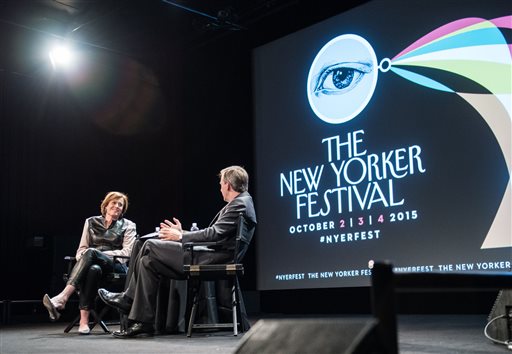 Schulz was referring to the annual weekend of events that brings out fans of the magazine from all corners of the country, salivating to hear their favorite authors read fiction or their favorite actors discuss their latest film, theater and TV projects. In this 16th year, those notables have included Sigourney Weaver, Jesse Eisenberg, Jeffrey Tambor and Damian Lewis, not to mention music names like Billy Joel and Patti Smith. (Nearly 20,000 people attended this year, from every state except North Dakota, and from 36 countries — including Latvia, Macedonia and Kuwait.)

But the festival also touches on the more urgent questions of the day, and this year, that included the upcoming presidential election and the earthquake risk in the Pacific Northwest.

A panel on the fault line known as the Cascadia subduction zone, which runs from northern California through Oregon and Washington, was pretty much just as scary as the much-discussed July New Yorker article about it. It began with a compilation of photos and film clips from the most devastating earthquakes of the last century, ending with a few seconds from the humorously unrealistic movie “San Andreas.” Schulz, who wrote the article and moderated the panel, quipped that the magazine’s famously exacting fact-checkers should have paid better attention.

But the discussion immediately turned serious, with experts explaining how the risk in the subduction zone is more serious than the San Andreas fault, with the potential of an earthquake measuring 8.3 to 9.2 on the Richter scale. Even worse would be the resulting tsunami, and chances of survival in the inundation zone, panelists agreed, were “very, very grim.”

Carmen Merlo, of the Bureau of Emergency Management in Portland, Oregon, outlined how much preparedness work remained to be done, noting it would cost hundreds of billions of dollars to retrofit metropolitan Portland alone — and that none of the city’s bridges were seismically fit.

At another panel, the only earthquakes considered were of a political nature. Specifically, panelists were discussing “The Hillary Question.” While the email controversy clouding Hillary Rodham Clinton’s campaign was not a major topic of discussion, questions of gender and double standards were.

One of the most passionate interchanges of the discussion, moderated by writer Jill Lepore, came when an audience member asked whether there was a sense among women “that Hillary is not quite one of the girls — one of us.” Gay responded: “That’s nonsense. That’s jealousy. She was the first first lady to have a graduate degree, the first to have a career. We need to look at these women not as ‘not like us,’ but as people we can aspire to be.”

Clinton also came up in a conversation between Sigourney Weaver and New Yorker film critic Anthony Lane, when Weaver expressed the hope that Clinton would be the next president — and that more women would get into Congress. She also decried what she called the demonizing of Planned Parenthood.

And Clinton came up yet again in the final talk of the weekend, a conversation with Lin-Manuel Miranda, creator and star of the Broadway hit “Hamilton.” Miranda mentioned that Clinton — who saw the show during its off-Broadway run, along with countless other notables — had thanked him backstage for including a (brief) mention of founding father John Jay. Clinton told Miranda that she loved Jay because he was a fellow “policy wonk.”

Introducing the Miranda talk, New Yorker editor David Remnick requested of the packed audience: “All I ask is, don’t beg him for tickets to you-know-what.” And a questioner ribbed Miranda about the show’s pricey (and elusive) tickets, saying she had “bankrupted her family” to see the show.

Moderator Rebecca Mead congratulated Miranda, who last week was announced as a winner of the MacArthur “genius” grant, for now being “officially a genius.” Miranda explained that he almost didn’t get the call with the good news because he kept sending it to voice mail, convinced it was the cable company he had just dumped. Finally he picked up the call. “I was ready for a fight,” he said.