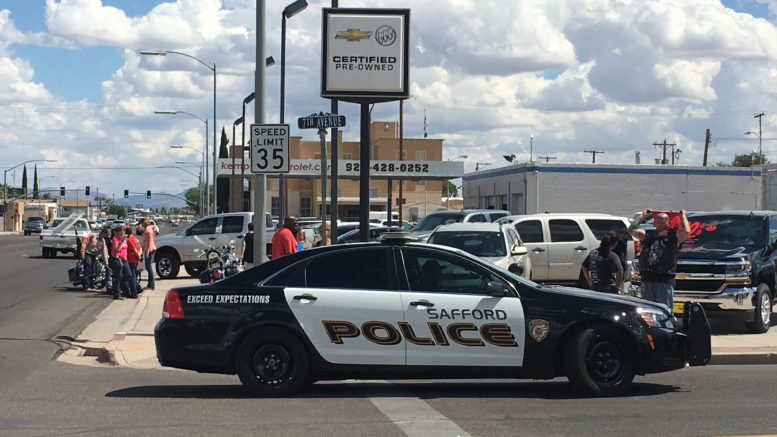 SAFFORD – A motorcyclist was taken by ambulance to Mt. Graham Regional Medical Center on Friday after colliding with a car that pulled out in front of him around noon. The driver of the car was reportedly on her cell phone at the time of the crash. A second motorcyclist laid his bike down to avoid the vehicles and the rider suffered lacerations to his head and arms.

According to witness statements, a group of motorcyclists were eastbound in the left lane of U.S. Highway 70 when a black, Chevrolet sedan that was facing northbound at the intersection of 7th Avenue suddenly pulled out in front of traffic in an attempt to perform a left (westbound) turn. The driver of the sedan, Melanie Kitcheyan, was not injured and was said to have been using her cell phone at the time of the crash, according to various witnesses. 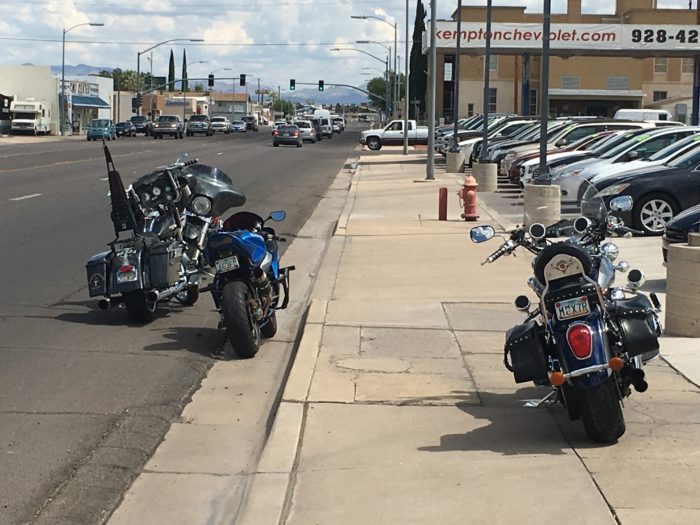 Jon Johnson Photo/Gila Valley Central: Here are some of the motorcycles that avoided the collision parked after the incident occurred.

One of the motorcyclists, Kenneth Jackson, collided with the front, driver’s side fender of the sedan and went headfirst over his handlebars. Jackson was placed into a C-collar and transported to the hospital by paramedics from Lifeline Ambulance. The other injured motorcyclist, Preston Tuscana, was also taken to MGRMC for treatment. While not at fault for the crash, he was found to be riding on a suspended license and was given a citation at the hospital.

Two other motorcycles skidded to avoid crashing into the car. A motorcyclist in the group who narrowly avoided the collision spoke to Gila Valley Central.

“(It’s) a lack of awareness of drivers,” Mike (no last name given) said. “They don’t pay attention to motorcycles. They always say it’s the motorcycle’s fault (but) it’s not. There was no reason for her to be there. Traffic was full . . . I can’t believe I didn’t get hit or hit her myself. I was a foot away from her door when I stopped.” (sic) 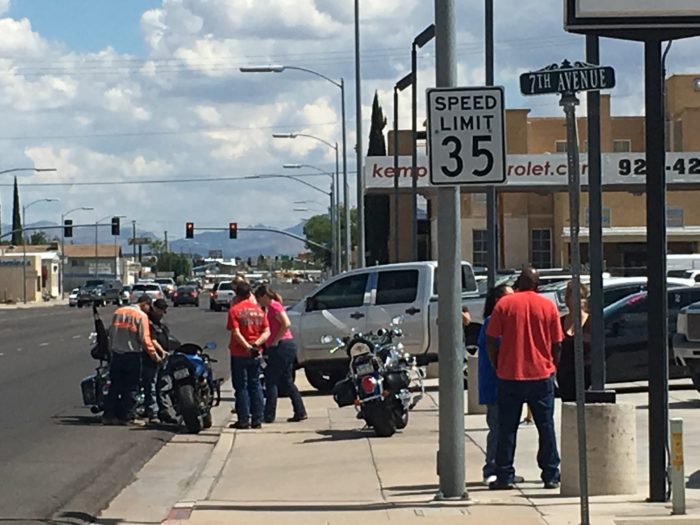 Jon Johnson Photo/Gila Valley Central.net: Motorcyclists check out their bikes after the incident.

A witness who was in another vehicle by the motorcycle group corroborated how the collision occurred. He said the motorcyclists were going roughly 25-30 mph and had just left the intersection with 8th Avenue when the car pulled out in front of them.

“She was on her phone,” witness George Butler said. “She pulled out and traffic was coming and it was backed up. There was no place for her to get in. She might have avoided a crash if she had been paying attention, (but) she wasn’t. She pulled on out to the next lane and left the bikers nowhere to go and so, as a result, they ran into her.”

Kitcheyan was found at fault for the crash and was given a citation for failure to yield from a stop sign. 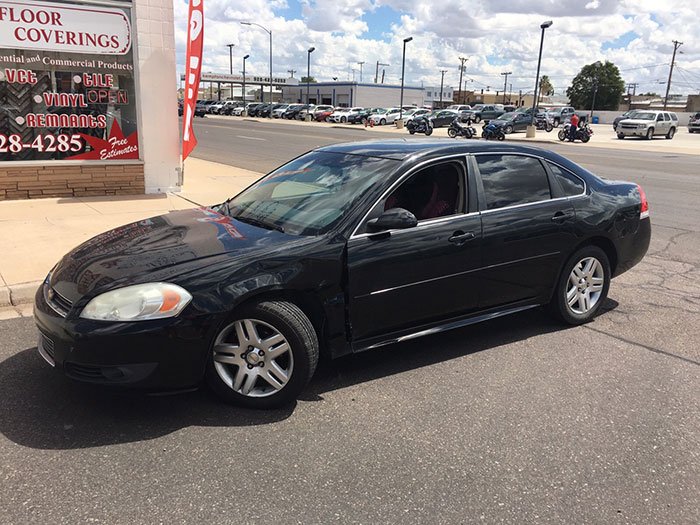 Jon Johnson Photo/Gila Valley Central: The motorcyclist hit the front driver’s side fender of this Chevrolet sedan after it reportedly pulled out in front of a group of motorcyclists.

This article has been updated.