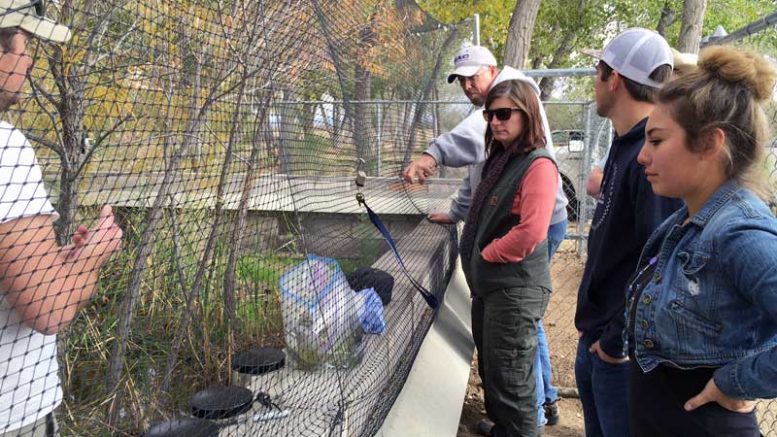 Contributed Photo: Cody Mosely and Audry Owens of Arizona Game and Fish discuss chytrid sampling with Dave Henson, EAC associate professor of biology and Science Division chair, and some of his BIO295 students.

“This fungus causes the infectious disease, chytridiomycosis,” said EAC Biology Department Head and ranarium manager, Dave Henson. “It has been linked to dramatic population declines or even extinctions of amphibian species all over the world, and we are very concerned about the frogs that are now hibernating at our ranarium.”

EAC partners with Arizona Game and Fish (AzGF), U.S. Forest Service and the U.S. Fish and Wildlife (USFW) Service to preserve and protect the frogs at the ranarium, and a plan is in place to eradicate the fungus this spring.

“Once the frogs become active this spring, we will move them to a semi-sterile location while we treat and observe them and heat dry the ranarium,” Henson said. “It will have to be completely dried out and cleaned before our frogs, hopefully the stronger, more chytrid-resistant frogs, can move back at summer’s end.”

“Ultimately, it will be a good thing,” said Discovery Park Campus Director Paul Anger. “We have to look at it that way, but for right now, it’s disappointing to find chytrid at such high levels in our ranarium.”

Anger speculates that two factors may have contributed to the high chytrid levels. First, the warm winter last year may have disturbed the frogs’ hibernation, which in turn disturbs their diet and can leave them in a weakened state. Secondly, the dry weather last year affected the water level in the ranarium, making the chytrid percentages rise leaving the already weakened frogs vulnerable to infection.

“It’s a setback, but it goes to show just how delicate the ecological balance really is,” Henson said. “We were reassured that all sites eventually have to deal with chytrid, but we have followed such strict protocol for the eight years since the ranarium started, we were still quite heart-broken to say the least. Thankfully, we have AzGF, The U.S. Forest Service, and USFW to collaborate with us on the best way to manage our animals and our ranarium during this recovery process.

EAC dance invites you to its Jane Austen Ball