Dalton Charles Overstreet passed away on January 24, 2017 at the age of 82 in Tucson. He was born in Octavia, Oklahoma to Vester and Dolly Moseley Overstreet. The family moved to Tempe when Dalton was six years old where he attended the 1st and 2nd grades at Kyrene School. There were four buildings, each housing two grades. Dalton attended 3rd grade in Chandler where he finished school and graduated from Chandler High School in 1952. Dalton was active in sports and was a sports writer for his High School Newspaper. Saturdays were spent mostly working in watermelon and potato harvests. Dalton really loved his family and had many happy memories of growing up in Chandler. He liked to reminisce and tool Michal on many tours of the old neighborhoods. 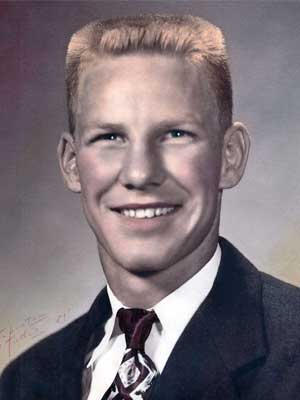 Dalton enrolled at Eastern Arizona Junior College in 1952. He played football and basketball for two years. He was the Sophomore Class President and spoke at commencement in 1954.

Dalton received a football scholarship to Brigham Young University and played there for two years. He played a little quarterback and was a starting defensive back both years and was also starting halfback his senior year. Dalton was selected to play as an All-star in Tempe during his time at BYU, in the “Salad Bowl” football game and was the front-runner of the Fiesta Bowl.

In 1956 Dalton became Head Football Coach for the Thatcher Eagles. Thatcher tied with Gilbert High that year for the State Championship. There were no playoffs in the “Olden Days”. He taught at Thatcher for three years, married Sandra Moody in 1957 and they are the parents of three boys, Rick, Scott, and Greg. He then taught and coached at Tolleson for one year, was Principal and Football Coach at Round Valley for three years and then at Eastern Arizona College for 24 years. He was Head Football, Assistant Football, Head Track, Head Baseball, Assistant Baseball, Head Volleyball, Assistant Volleyball Coach and Division Chair of Health and Physical Education throughout his career.

Dalton married Michal Hoopes Dolan in 1977. Together they raised two sons, Shawn and Jason. In 1979 they partnered with Michal’s parents, Gordon and Fern, buying El Charro Mexican Restaurant. Many family members had their first job there. He and Michal operated and owned El Charro for 35 years.

Dalton was Principal at Pima High School for five years and also Volleyball Coach. In 1993 he went to Yavapai College in Prescott where he served seven seasons as Head Volleyball Coach; also as the Athletic Director the last two years. He volunteered and assisted with the Thatcher and Pima volleyball teams as well as Safford Club Volleyball throughout his life. There are great memories from each of his educational and coaching positions where he positively influenced young lives. Dalton spent many Summers working with the Forest Service on Mt. Graham where he met and influenced many people. Dalton and Jerry Hekekia developed a strong bond of friendship coaching together, teaching at volleyball camps throughout Arizona and New Mexico, and spending many hours together on the road enjoying one another. Dalton and Michal also enjoyed special trips around the country with Greg and Deanna Brockmeir.
Dalton joined The Church of Jesus Christ of Latter-day Saints on April 17, 1953 while attending EAC. Typical of Dalton, he was active in the church sports programs, playing and coaching. Dalton held many different positions in the church including counselor in Safford 3rd Ward Bishopric and in the Young Adult Branch Presidency at Yavapai College. His most recent position was Ward Clerk for Safford 5th Ward and four other Bishopric’s, a position he really enjoyed.

Dalton is preceded in death by his three brothers, Vester, Lloyd and Floyd, sister Beth and granddaughter Tosha.

Dalton’s passion and love of coaching volleyball has left a great legacy. In lieu of flowers, his family suggests donations be made to the Safford, Thatcher, or Pima High Schools Volleyball programs.

Services are under the direction of McDougal’s Caldwell Funeral Chapel & Gila Valley Crematory. Online condolences may be sent to www.caldwellfuneralchapel.com.