SAFFORD – Aloha Baby, the newest and only elective ultrasound studio in Safford is designed just for the newest addition to your family.

With the roadwork newly completed, the Aloha Baby Studio at 608 S. Central Ave. in Safford is alive and kicking as the only ultrasound photo studio in the Gila Valley. The Aloha Baby Studio boasts a complete 3D, 4D, and 5D ultrasound imaging suite. Also, Aloha Baby markets a large variety of gender reveal party supplies, including gender-themed chalks and celebration glitter cannons. A new Sneak Peak Test early DNA gender test is also available in the studio, which is able to predict the gender of the baby at the early stage of just nine weeks. Aloha Baby also works with maternity photo sessions, newborn photo sessions, and gender reveal photo sessions.

Contributed Photo/Courtesy April Harris: This banner demonstrates the differences in the various types of sonogram imaging.

April Harris is the owner of Aloha Baby and the woman behind the intricately detailed ultrasound machine. Also, Harris is one of the studio photographers, specializing in not only ultrasounds, but also newborn, pregnancy, and life event photography. 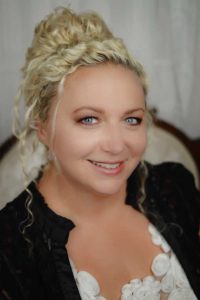 When asked why she decided to set up the only ultrasound studio in the Gila Valley, Harris said that she believed that it would be nice for local parents to be able to see their babies without the commute to larger cities. Being a pregnant woman and having to sit down for a long car ride is far from comfortable.

“Whenever I had my babies I had to travel uptown for these,” Harris said. “And I just think it would be nice to have somewhere local to finally be able to go and do something like this.”

Aside from the fact that local moms would usually have to travel several hours to see their unborn baby like this, Harris loves the experience of introducing the new baby to the family.

“I think it’s really a cool thing to see people meet their baby for the first time,” she said. “It brings tears to their eyes, and it’s a bonding experience. That’s the main thing.” 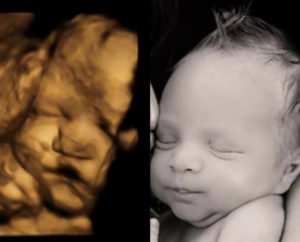 Contributed Photo/Courtesy April Harris: This photo illustrates the accuracy of high-tech sonogram imagery of a baby on the left, and a photo of the baby after birth on the right.

Not only does the studio offer ultrasounds, but expectant moms may also schedule to come in and listen to the heartbeat of the baby. Harris told Gila Valley Central that this feature would not be anything to do with medical examinations or measurements. However, if an expectant mom simply wants to schedule a time to just come in and check on her baby, she can.

“Starting at 10 weeks, we can pick it (the heartbeat) up on our machine,” Harris said. “It is not medical at all, but you can just see that the baby is in there wiggling and hear the heartbeat. There are no measurements taken. It’s strictly for people to come in and see their baby. I wish I had had that. I had a high-risk pregnancy, plus I had twins, so I wanted to make sure that both of them were okay. You’re always worried, but here you can come in and see your baby.”

“Most doctors won’t even tell you what you’re having on your ultrasound until 18 to 20 weeks,” Harris said. “But I am specifically trained in early gender determination.”

However, before anyone decides to get their sonogram photos taken, it is incredibly important for the expectant mommy to drink plenty of water. The unborn baby is essentially being suspended in a sack of fluid. When the mother does not drink enough fluid, the sack clings to the baby, making the photos blurry. However, if the expectant mother has a healthy water intake, the baby will be free floating in the placenta, giving Harris the perfect opportunity to take wonderful sonograms. 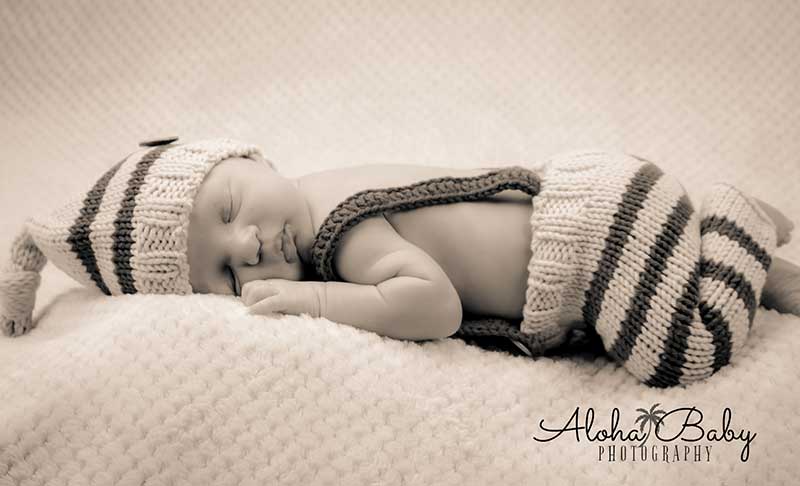 What is a 3D and 4D Ultrasound?

Studies suggest that 3D and 4D ultrasounds are safe. Plus, the images can help doctors spot a problem with your baby and make it easier for them to explain it to you. 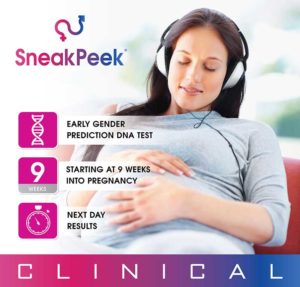 What is the SneakPeek Gender Determination DNA Test?

SneakPeek is the early detection gender test. Within 24 hours of receiving a small blood sample, SneakPeek will identify the gender of your baby. Aloha Baby will schedule a clinical for the patient, providing a phlebotomist to collect a small blood sample.  After the sample is collected, it will be mailed to a lab for testing. A state of the art lab will process the sample and detect the presence of fetal DNA and determine the gender of the baby with 99% accuracy. SneakPeek® utilizes the natural process of shared fetal DNA circulating in the mother’s bloodstream to determine gender.