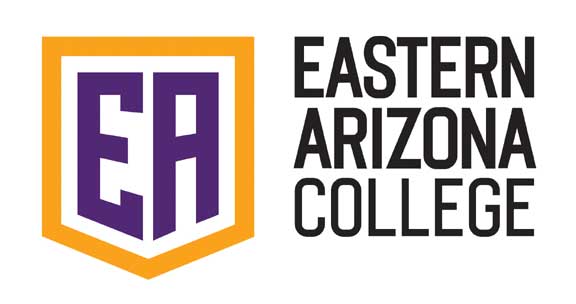 THATCHER — Eastern Arizona College unveiled a new brand identity that features a primary logo and modernized Gila Hank during its faculty and staff Monster Symposium this week. The College’s Gila Hank — designed in 1947 by The Arizona Republic cartoonist, Reg Manning – will remain as a classic look on campus touchpoints. The College’s traditional purple and gold colors will also remain.

The new brand identity takes its primary design from more than 300 surveys and 15 comprehensive focus groups held with students, faculty, staff, and community members over the past year. It replaces the College’s mountain logo that was created in 1997 and modernizes the 75-year-old Gila Hank for use in digital platforms.

EAC’s new primary logo — a foundation mark used for maximum brand recognition – features a shield reminiscent of the main architectural element used in past and current campus structures. Within the shield is an “EA” monogram. Limiting the shield to two letters from the College’s acronym allows the monogram to remain legible within extreme space constraints. The primary logo also includes a hand-drawn wordmark unique to the College.

“We consistently heard that the College’s primary logo should be bold and traditional yet retain a modern look and feel,” said Todd Haynie, EAC president. “Our designer achieved this tall order by coupling the traditional shield with a stylized “EA” monogram — the letters most often used to vocally reference the College for the past 134 years.”

The new identity system follows best design practices that extend the primary logo to various versions that brand a growing institution — something EAC’s mountain logo struggled to accomplish. The system includes a primary logo as the College’s complete signature, a medallion for traditional treatments, a stand-alone monogram for scaled-down digital settings, and campus and program extended monograms.

“EAC’s brand is critical in today’s competitive landscape. The new design seizes every opportunity to tell our story on every platform. It expresses why students should chose us over the others, communicates the quality of our services, and uses the boldest imagery to make us immediately recognizable. It is simply amazing,” said Haynie.

For maximum brand recognition, the new brand identity also extends the College’s primary logo to the EAC Athletic Department, including a modernized version of Gila Hank. The new athletic design is the culmination of input that indicated change was needed, but that Gila Hank should remain a strong, confident, and bold fighter.

Based on best design practices, this system includes the College’s “EA” monogram as the primary athletic mark, the mascot mark for informal merchandising, the extended mascot mark for athletic programs, and full body versions of the classic, new, and youth Gila Hanks.

“Eastern Arizona College has been known as the Gila Monsters for more than 100 years and Gila Hank has been a core element since 1947. The modernized version is committed to the central idea of Gila Hank over time, has the capacity to transcend change, and provides limitless marketing and public relations opportunities.”

The design was developed with significant creative assistance from the College’s current and former design students. Monique Saldana — an EAC employee and former graphic design student — played a key role in the new visual identity. She made extensive revisions and exclusively created the Gila Hank youth mark. After graduating from Eastern Arizona College with a degree in graphic art, Saldana attended Grand Canyon University where she received her bachelor’s degree in digital design with an emphasis in animation.

The new brand identity will be implemented using a phased, fiscally responsible approach. Digital touchpoints will be changed immediately. Printed items that contain previous branding will be replenished as needed. The College is developing an updated costumed mascot to enhance school spirit and pride at athletic and other campus events.