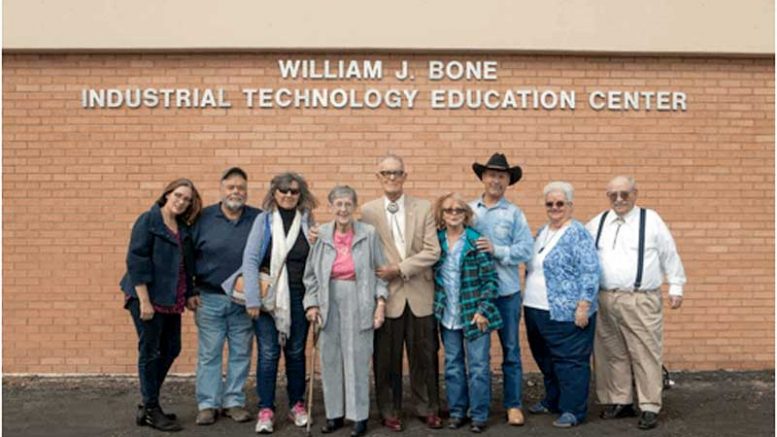 Photo By Todd Haynie: Pictured here are friends and family of William J. Bone, who were on hand for the dedication of the Industrial Technology Education Center earlier this week. They are, from left, Isis Gauzens, Bob Radcliff, Marlene Werth, Retha Bone, William Bone, Paula Bright, Bill Bright and Ginny and Floyd Misak.

After the National Anthem was sung by the EAC Women’s Chorale, remarks were given by George Lord, president of the EAC Alumni Association. Foundation Executive Director David Udall introduced William J. Bone, who gave remarks about what EAC has meant to him and his family, and accepted the dedication plaque from EAC District Governing Board President, Lois Ann Moody, and EAC President Mark Bryce. President Bryce gave the formal dedication.

After graduating from Willcox High School in 1948, William J. Bone accepted the fact that he would not be able to attend college due to finances. But that summer, something happened that changed the direction of his entire life. He recalls, “A car drove up to the house and two men got out and visited with me. They said they were teachers from Gila Junior College and were hoping I would consider attending.”

After working out the finances, Bone did attend Gila Junior College, and, while he was in attendance, the name of the school changed to Eastern Arizona Junior College. He thoroughly enjoyed his experiences while he worked his way through school and continued on to the University of Arizona, where he obtained two additional degrees. He eventually became a teacher and taught in Tombstone for 40 years, always grateful for his start at EAC.

Wanting to give back to the school that helped him keep his dream of an education alive, and which set a course for his life that would be fulfilling on many different levels, Bone decided to begin sponsoring student scholarships at EAC over 30 years ago. He has served on the EAC Alumni Association Board of Directors for nearly that long, including several years as president. His memories from Eastern have led him to become one of the most generous donors in College history.

Watch this video to see him tell the story in his own words: http://bit.ly/2ltcBKV .

For more information about the Eastern Arizona College Foundation contact David Udall at alumni@eac.edu or (928) 428-8295.