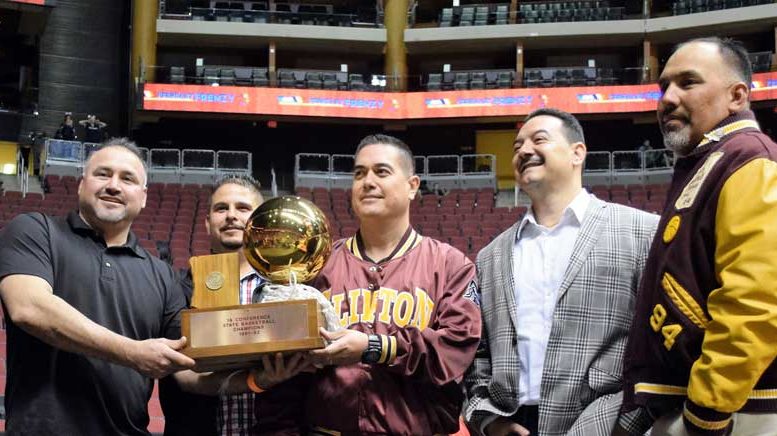 Photo By Raymundo Frasquillo: Five members of Clifton’s 1992 state championship basketball team were on hand for the 25th anniversary of the event. Posing for some pictures prior to the halftime ceremony are, from left, Joe Peru (1992), Eddie Navarrete (1994), Armando Carrillo (1993), Bill Barquin (1993) and Chris Aguallo (1994).

GLENDALE – Long ago, they would gather whenever the urge hit them, to play for the love of the game. It was before school, at recess, during lunch break, after school and on weekends. Individually, they shot and shot, dribbled and learned strategies. It was not uncommon to hear the ball hit a neighborhood backboard or the sound of someone dribbling late into the night. They got better.

As they grew older, they transitioned into an organized situation with adult coaches and referees. The result, they reigned over their known world as teenagers on the extra day of the 1992 leap year. Eleven of the community’s youth walked off the Tempe Union High gymnasium floor Feb. 29 and stepped into history as the last champion basketball team from Clifton.

Five of those now grown men, joined by their four-member coaching staff, stood tall as they proudly stepped onto the Gila River Arena court to be recognized on the 25th anniversary of their athletic accomplishment. The Trojan basketball team’s second gold-ball trophy season was recognized by the Arizona Interscholastic Association on Feb. 25, 2017.

Clifton Class of 1992’s Joe Peru, 1993’s Bill Barquin and Armando Carrillo, and 1994’s Chris Aguallo and Eddie Navarrete, along with assistant coaches, also home grown, Harold Quinonez (1981), Fred Barquin (1971) and Raymundo Frasquillo (1968) plus head coach Stephen L. Hudgens were in the Glendale house. Through available technology, others not in attendance were live streamed on television or computer-related electronic devices.

Photo By Raymundo Frasquillo: Followers and family members were on hand to record the recognition of Clifton’s 1992 state championship team recognition.

Their lives mirror society. Some are twice married and twice divorced and are in no hurry to commit to another permanent relationship. Some are parents, home and property owners in positions of authority and responsibility, and some are not. The thing they now all have in common, is they are responsible, tax-paying members of their communities. They are no longer wide-eyed, gullible children. They are all adults, able and willing to live with the choices they make.

A visible indicator of them being at least 20 years beyond 21 years of age, was the contents of three ice chests at the post-ceremony gathering in one of the team members’ home afterwards. They were filled with beverages derived from barley and hops, consumed at social functions by adults, not sodas or water containers. The mid-afternoon ceremony evolved into friends gathering for companionship and conversation until after midnight. 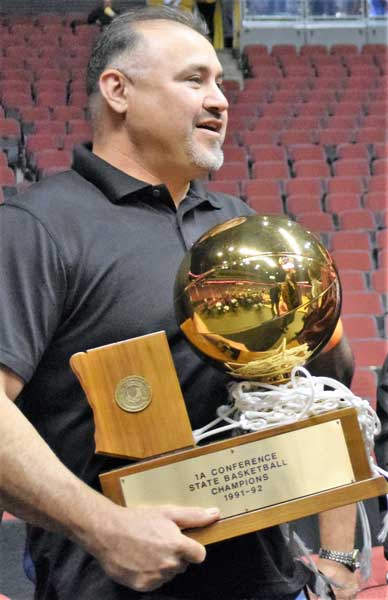 Photo By Raymundo Frasquillo: Clifton Class of 1992 member Joe Peru lines up to step onto the court at Gila River Arena.

“I learned a lot of life skills, teamwork, discipline, what it takes to win and be successful,” Peru said. “We got support from all the parents, coaches and teammates. It made us stronger.”

“We did whatever it took,” said the metropolitan Phoenix area resident. The inside player was the best ball-handler on the team, running circles around the experienced guards and making lay-ups on one of the many two-on-one defensive dribbling drills run periodically during the practice sessions. During a late season session, two of the coaches looked at one another and asked, “When did Joe become a guard?” as they scratches their heads unable to account for what had transpired before their eyes.

His role wasn’t that of a ball-handler. He was a rebounder and inside defender, but he became whatever was needed on the team through practice, attention to detail and a desire to be the best at something.

“I was extremely fortunate,” Barquin said. His formal education was paid for through his athletic prowess, earning a scholarship to attend Cochise College and then Grand Canyon University.

“There was a point where you have to choose what your professional goal is or want to do,” the Phoenix resident said.

From his participation in athletics, he learned and came to understand the work ethic involved in playing to win and being successful, not only in an athletic setting, but in one’s professional life. “I’d rather have someone work for me who is reliable rather than someone who knows a lot, because I can depend on them,” he said.

He learned his growth and advancement as a person is due to the community from whence he stems. “It set a foundation,” said the current 10-radio stations chief operations officer. “It takes more than one person, it takes a team, team, team.”

Carrillo remembered “the commitment, dedication, being together family atmosphere, work ethic involved, preparation and sense of pride.” The Safford area banker walked away from his experience with all that plus confidence in what he could do. 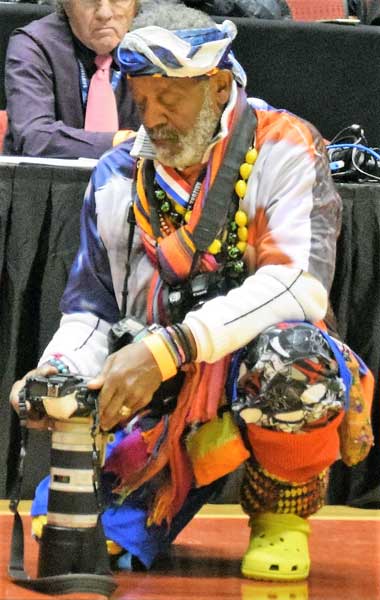 Aguallo said participating in athletics made him healthier and a better competitor. The knowledge he gained is a lot of what he gives back to the community as an adult, being the head coach of Morenci’s softball varsity team for several years and now as an assistant high school baseball coach.

Navarrete took “the camaraderie, sense of family, the sportsmanship, competiveness, establishment of a work ethic, how you present yourself and accountability,” from his participation in athletics.

“Participating in sports at a young age helps us in the life we live as adults today,” said the Tucson resident. “It prepares us for the different life challenges. It helps in all careers, providing stability and a foundation to build on. You are empowered to succeed in the career fields of your choice.”

Also, not on the traveling team, but getting an introduction to the level of play were Class of 1994’s Mario Esquivel (8 games), Peter Ortega (9 games) and manager Mario Pedregon plus 1995’s A.J. Murry (3 games) and Jerry Quinonez (2 games).

Monjaras said he was told, on the run under 10 seconds conditioning drill, “I had to make it in eight, even though I needed to use an inhaler.”

As an adult, “I thought to myself, if I can do that, nothing else is harder,” said the Greenlee County law enforcement officer.  The police academy physical conditioning and requirements “weren’t that hard.” And when he went to the Middle East for a couple of years, “It was nothing. It wasn’t that hard.”

Chavez remembered, “We had the town support, a lot of people driving where ever we played to watch us. We had large crowds. It was an awesome year.”

He recently viewed game film, on DVDs, of the season and was struck by how large and vocal the crowds were.

“It was hard getting kids to understand what it takes to be successful,” he said. “Only one group understood and played like it, unselfish, looking for one another on the court.” 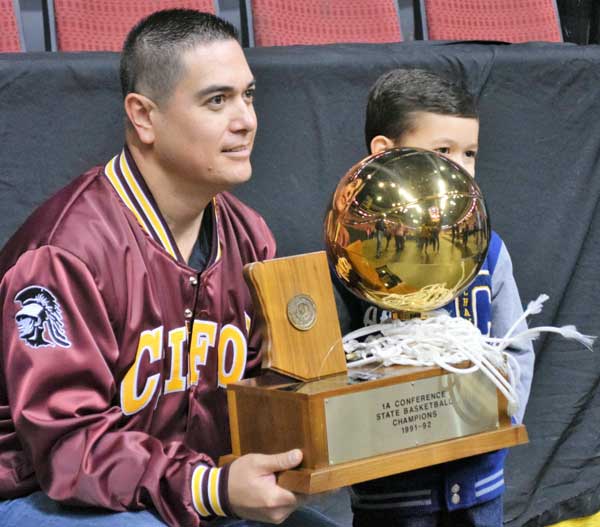 A couple of coaches remembered the night one of the staff members was inadvertedly left behind after a game in San Simon. He wasn’t aware of being left, following up on one of his duties and hadn’t noticed the traveling party had departed without him. When the van arrived in the ‘Land of Enchantment’ meal stop, one of the students riding a different vehicle asked him if he was scared because he had being left. His response was, “I didn’t know I had been left behind.” It never happened again.

A power rating system was not in place. The top two teams in four regions following a region tournament qualified for the eight-team state tourney field.

The first-round opponent dispatched by the maroon and gold in the single-elimination tourney was Central second seed Scottsdale Christian, by a single point, 69-68, scored with a second remaining. The semifinal victim was the West top seed Phoenix Country Day School, 80-67. The Trojans jumped out to a 25-15 opening period advantage, and never trailed thereafter, leading 39-31 at halftime and 57-45 after three periods. 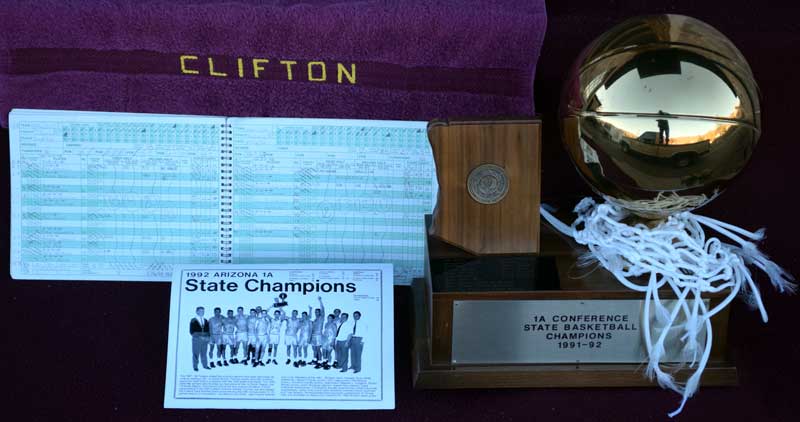 Photo By Raymundo Frasquillo: Clifton’s second boys basketball state championship trophy, earned by the 1992 team, was carried unto the Glendale Gila River Arena court in recognition of the 25th anniversary Feb. 25. It was housed in Clifton’s Cislaghi Gymnasium, but is now encased on permanent display in Wildcat Memorial Gymnasium. Also brought out for the event was the season scorebook and a commemorative image of the state finish.

“I thought we were a year away,” Hudgens said following the final buzzer for the title game and prior to the trophy presentation. When asked about what he did different than what was done the year before, to be standing awaiting the gold-ball trophy, his response was, “nothing, they already knew what to do.”

The preparation in the off-season, coupled with the work ethic displayed in the daily practice sessions, and the overall individual maturity, willingness to do whatever was needed and a personal sense of confidence from being prepared for whatever they would face, was the formula in a nutshell. 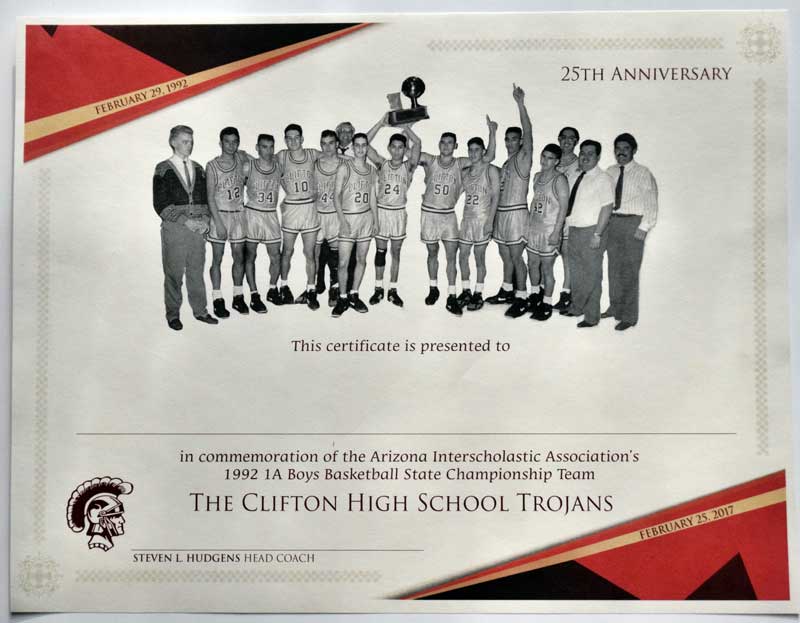 Clifton’s 1955 Class B (2A) State Boys Basketball Championship team was recognized in 2005, with a majority of the members in attendance at the America West Arena, with the late Barry Sollenberger leading them onto the court.

The 1992 Trojans were recognized as 1A Boys Basketball State Champions during halftime of the Phoenix Shadow Mountain verses Tucson Salpointe Catholic championship game. They will be recognized again in 25 more years on the 50th anniversary of their 1992 feat, in 2042.

There will not be another state championship team from Clifton as the school shuttered its doors following the end of the 2015 school year, and the district was dissolved as soon as the bills were paid