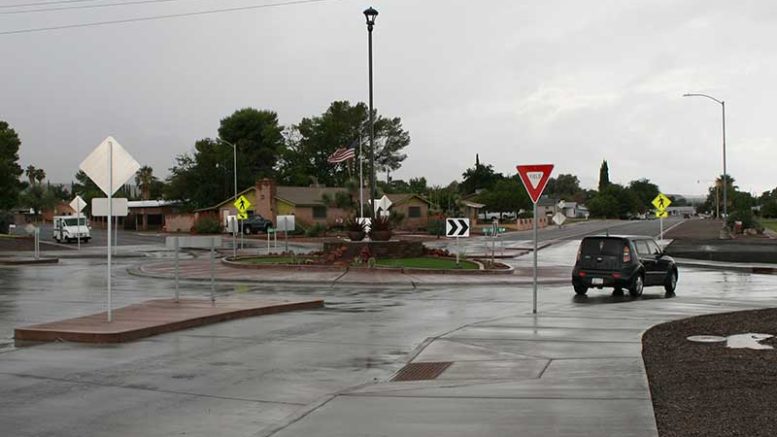 Brooke Curley Photo/GIla Valley Central: The roundabout in Thatcher is a first for the Gila Valley.

THATCHER – With traffic safety as its main focus, the town of Thatcher has installed the Gila Valley’s first roundabout at a previously confusing and dangerous intersection. But it also looks good, too.

In a roundabout, all traffic travels counterclockwise around a center island with vehicles entering the roundabout yielding to current circulating traffic. Thatcher Mayor Bob Rivera told Gila Valley Central that it was a necessity to build the roundabout because drivers refused to slow to the speed limit. Although the speed was dramatically reduced from 45 mph to 25 mph, many motorists didn’t heed the speed change, resulting in a dangerous area for pedestrians and motorists alike. The roundabout features a center island with bump-outs and lane dividers at each leg as well as a truck apron to accommodate larger vehicles, such as busses, RV’s or vehicles towing trailers.

“It was built in the name of safety,” Rivera said. “People were coming at 45 miles an hour. It dropped to 25 and there was a lot of complaints of cars flying by and not slowing down. So, there was a concern there and we had a wreck or two there that could have been really bad because of traffic not slowing down. There are five accesses there and that’s the easiest way to slow down traffic and people can go about their businesses in a safe way.”

The interior circle of the roundabout features grass and desert landscaping.

In addition to reducing the severity of traffic collisions by the sheer drop in speed necessary to negotiate the roundabout, the design also ensures that if a collision were to take place it would be a glancing crash and could never be a head-on collision, which are the types with the most fatalities and severe injuries.

The entire project was done “in house” as Rivera puts it, with the town of Thatcher’s engineer, Heath Brown, designing it, and the maintenance crew doing the cement work. However, because of the water runoff from the Frye Fire burn site, the town of Thatcher has other work it needs to do before it finishes the roundabout project completely.

“Tommy Nickles and his crew did the cement work, and I think they did a wonderful job,” Rivera said. “It was confusing for a while when it was under construction. I give it a couple months of learning curve. This is the first roundabout in the valley, and it will just take some getting used to. We’re putting things on hold because we have a grant that was given to us to move some earth by Frye Creek to get it out of the way because of all the rains coming down now and nothing holding it back from the fire. So, that’s going to give us the opportunity to move a lot of earth behind the Frye dam, and that area over there. That’s taking away from some of the work.”

The town of Thatcher also intends to put a roof over the Daley Estates park and put in a walking path from Golf Course Road along Hoopes Avenue to Valley View. The overall roundabout project is scheduled to be completely finished toward the end of September.