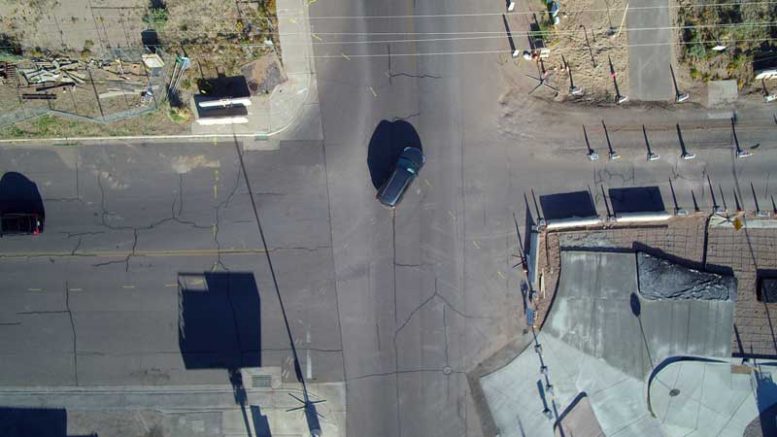 Jon Johnson Photo/Gila Valley Central: A car travels through the center of a roundabout under construction in Thatcher at Daley Estates.

The Thatcher roundabout is being constructed at the intersection of Golf Course Road, Reay Lane, Hoopes Avenue and Robinson Avenue. There is currently stop signs at Hoopes and Robinson avenues and Reay Lane, but eastbound and westbound traffic on Golf Course Road does not stop, although the speed limit is lowered from 45 mph to 25 mph through the intersection area. The roundabout will feature a center island with bump-outs and lane dividers at each leg as well as a truck apron to accommodate larger vehicles, such as busses, RV’s or vehicles towing trailers.

The project’s is $320,000 cost is completely funded by Thatcher and will include a total rebuild of Hoopes Avenue from Golf Course Road to Valley View as well, according to Thatcher Town Engineer Heath Brown, who designed the roundabout. Brown said the decision to use concrete in the roundabout was made due to the turning factor of the circular shape and how much better concrete will hold up over asphalt. Additionally, since the town is pouring the concrete itself, the cost is approximately the same as if the town had hired a company to lay asphalt, according to Brown.

The update to Hoopes Avenue will create a standard, undivided street with a crown in the middle to assist with drainage and will also include a multi-use path along the east side of Hoopes Avenue that will connect to the current path along Golf Course Road. Brown said he hopes to finish the entire project, including the roundabout and rebuild of Hoopes Avenue, by July.

According to the U.S. Department of Transportation Federal Highway Administration (FHA), roundabouts “have been proven safer and more efficient than other types of circular intersections.”

In a roundabout, all traffic travels counterclockwise around a center island with vehicles entering the roundabout yielding to current circulating traffic. Brown said that while the speed limit on Golf Course Road lowers from 45 mph to 25 mph, most motorists do not follow that and continue to speed through the intersection, creating a dangerous area. He said the roundabout will force traffic to slow down through the intersection. 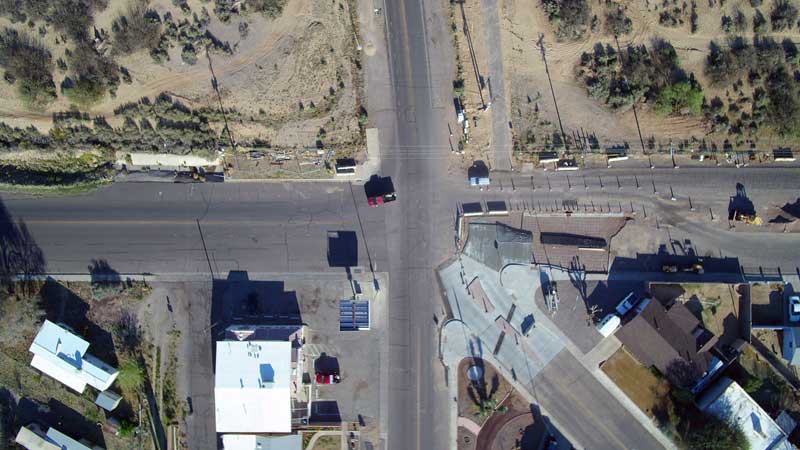 Jon Johnson Photo/Gila Valley Central: This aerial view shows the constructed portion of the roundabout along Robinson Avenue. The entire project is expected to be completed by July.

“The design speed is 15 mph, and if you’re going 20 to 25 mph, you’re going to feel like you’re going way too fast,” Brown said. “You’ll feel a little out of control, so it will definitely slow people down going through there.”

In addition to the roundabout at Daley Estates, Thatcher is also planning on constructing a roundabout at the intersection of Church Street and Third Avenue. That roundabout is part of a larger project that encompasses a complete rebuild of Church Street from U.S. Highway 70 to Stadium Avenue that will include new sidewalks, curbs and gutters and new asphalt from curb to curb, according to Brown. That project is estimated at $2.5 million, and the town is looking to utilize grants to pay for the majority. The town has $1 million in grant funding that is definitely available by 2021, but Brown said the town is hoping to find alternate sources – through either trades or loans – to get the money sooner and have the project start in 2018 or 2019 if possible.

Every year, more than 7,000 people are killed and nearly 1 million are injured in intersection-related crashes, according to the FHA. Most of the deaths and injuries are due to right-angle crashes at intersections with stoplights and stop signs. Roundabouts reduce that statistic because any collision is more likely to be a low-speed, same-direction glancing blow because of the curvature and the resulting lower traffic speeds (usually between 15-25 mph) in a roundabout. Additionally, conflict points (where two vehicles could collide) are reduced from 32 conflict points with a traditional, four-legged intersection to just eight in an equivalent roundabout.

The FHA also reports roundabouts improve safety for not just motor vehicles but for pedestrians and bicyclists as well. 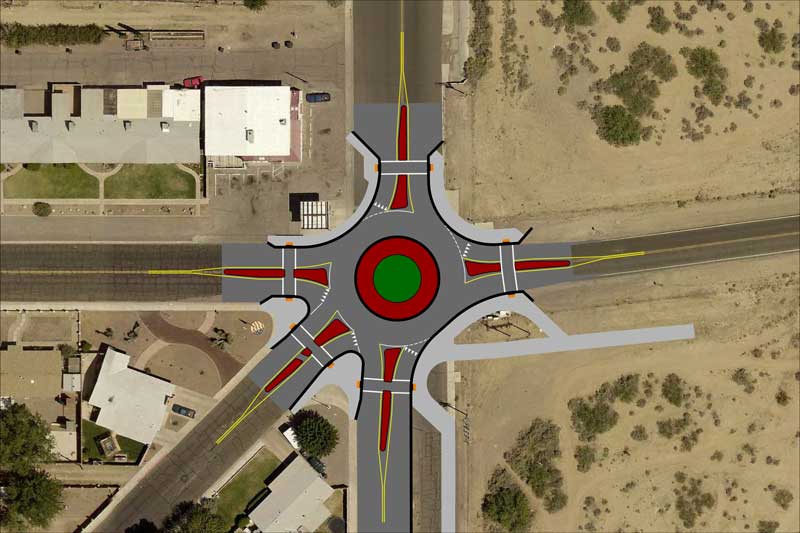 Contributed Graphic/Courtesy Town of Thatcher: This artist’s rendition shows how the completed roundabout will look.