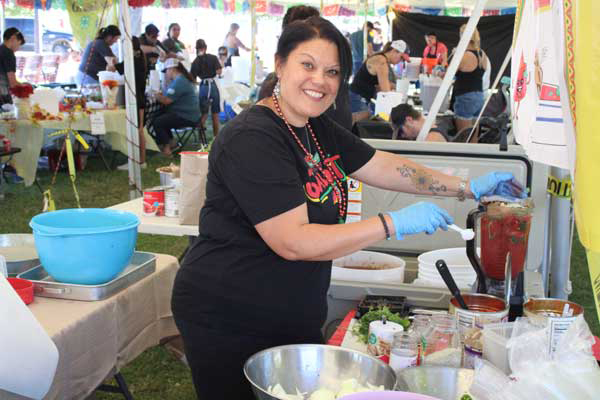 Deanna Best is all smiles as she blends her award-winning salsa at the 2022 NatureSweet SalsaFest on Saturday. Best won the $1,000 first prize from the judges, and $100 for third place in the People's Choice Category. - David Bell Photo/Gila Valley Central

Best’s D Best Salsa captured the $1,000 top judge’s prize at the 16th annual NatureSweet SalsaFest in Fireman’s Park on Saturday. She said this year the competition was stiff.

Best was also named third place in the People’s Choice category, winning another $100. Between the judge’s and people’s choices, she has captured 13 winning plaques in the history of SalsaFest.

The $500 second prize in the Judge’s Choice category went to Cody Ochoa for his 8A Salsa, while the $250 third prize went to 10-year-old Rylee Clonts for her Mini Spice Salsa. Clonts also won $200 for placing second in the People’s Choice Category.

The $500 prize for first place in the People’s Choice category was presented to Antoinette Rios for her Lita’s Bonita Salsa.

Rios said the highlight was making her recipe at the event with the assistance of her children.

In the Presentation Category, the $200 first prize was awarded to Ernest Esparza and the $75 second-place prize was won by Gina Peterson.

In the Taste of the Trail competition, which pits against one another the salsas from the restaurants on the Salsa Trail, the $1,000 top prize was awarded to Isabel’s South of the Border Salsa de Arbol. The $500 prize for best green salsa was won by El Coronado and the $500 prize for best red salsa went to Trailhead Hideaway.

The other big competition during SalsaFest was the Chihuahua races, put on by the Safford Lions Club and sponsored by Arizona G&T Cooperatives.

Previous champions Rocky and Corndog were upset by a newcomer this year, Leeloo, who had to beat Rocky in the semifinals and Corndog twice in the finals to take home the $100 first prize.

Owner Adi Scott said there was no training with Leeloo before the competition.

“She just runs after balls really well, and she comes to me very well, so we figured we’d try,” Scott said.

Ricardo Pineda, Consul of Mexico in Douglas, opened the 2022 NatureSweet SalsaFest on Friday, followed by folklorico dancers performing to the music of Mariachi Luz de Luna.

Pineda also served a judge in the salsa competition, as did Barry Wong with Gov. Doug Ducey’s office and Juan Ciscomani, who is the Republican running for Congress.

Meanwhile the Democratic candidate for Congress, Kirsten Engel, announced and helped present the awards at the Chihuahua races.