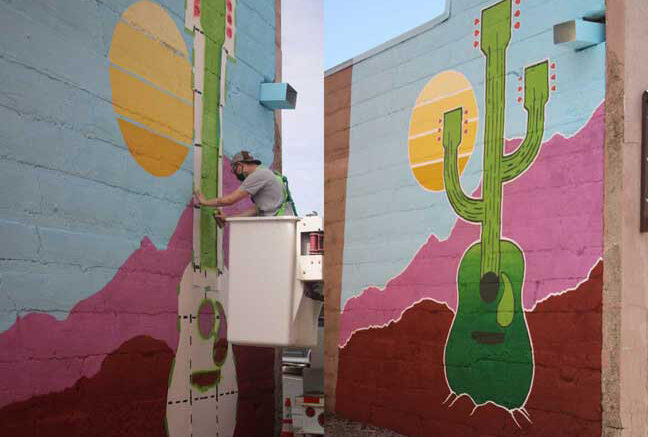 Left, Brandt Woods uses a stencil to create an 18-foot mural of a guitar with a saguarro cactus as the neck, right, on the north wall of the Richard's Music building. - David Bell Photos/Arizona Fan Fest

The creator of the comics “In Their Nature” and the ongoing single-panel strip “Crow and Pistachio” wanted to paint a mural in Safford’s Downtown shopping district for more than a year. He had reached out to the Safford Downtown Association, who had recently commissioned a mural on the east side of the Farmers Insurance building.

That led to pitching concepts to a number of building owners who, for various reasons, just weren’t in the market for a mural at the time.

But this year he got the chance. Richard’s Music owner Dave Murphy reached out to Woods to do something on the north wall of the building. Woods came up with an 18-foot guitar, with a saguaro cactus as the neck, against a backdrop of the Arizona sun and mountains.

“From my usual style, I simplified. And not in a bad way, I just tried to make it so that, if I’m doing something this big, I want to make sure I nailed it,” Woods said. “So I really simplified the design to more of a graphic style. Instead of having to put a lot of gradients in, I just wanted to pick the right colors.”

The mural won universal acclaim, which saw him get an offer for a second mural, just two weeks later, on the west side of the new Gila Valley Made building.

“When they (Gila Valley Made founders Torey Cranford, Tricia Garrett and Taylor Ludwig) said, ‘OK,’ I made some more designs and they wanted colorful. So this is what we went with,” Woods said. “Basically, when they said they were interested, I brought them the designs and (they) were in love with one of them. That’s what we’re doing.”

The second mural, featuring the words, “Made in the Gila Valley,” against a backdrop similar to the Richard’s Music mural, creates a unifying theme in the Downtown area. The goal is to also encourage visitors to Downtown to take photos and selfies in front of the mural — especially new parents and those who are expecting.

The Woods murals, in addition to the “Greetings from Safford” mural by artist Amy Novelli and Joe Roaneagle’s murals at Sarah’s Bullpen and 19 Double X Studios tattoo parlor, are setting an art-friendly tone in the Downtown area, with the principals of Gila Valley Made expressing an interest for more artwork on their building in the near future.

Safford’s Main Street, in the heart of the city’s Downtown area, will be the home of Arizona Fan Fest, April 22-24, 2022, and Woods will be participating in the convention with panels on digital art, as well as having collections of his comics available for sale.

Admission to Arizona Fan Fest 2022 will be free and the convention will take place in conjunction with the 2022 Safford Spring Festival — a wine tasting, art and history event — also taking place on Safford’s Main Street that same weekend.

The costume contests will take place Saturday, April 23, 2002, and participants in the age and group categories can sign-up that day at the convention. Cosplayers participating in the premier category — which features a $1,000 prize for first place — must pre-register at AZ Fan Fest Cosplay | GilaValleyCentral.Net. There is no cost to register for any of the costume contest categories.

Cosplayers, artists and writers, gamers, comic book publishers and retailers, sellers of collectibles and food vendors who wish to reserve space at Arizona Fan Fest 2022 can do so at AZ Fan Fest Vendor Reservations | GilaValleyCentral.Net. Spaces are $75 for each 10×10 space and there is no limit on the number of spaces a vendor may reserve.