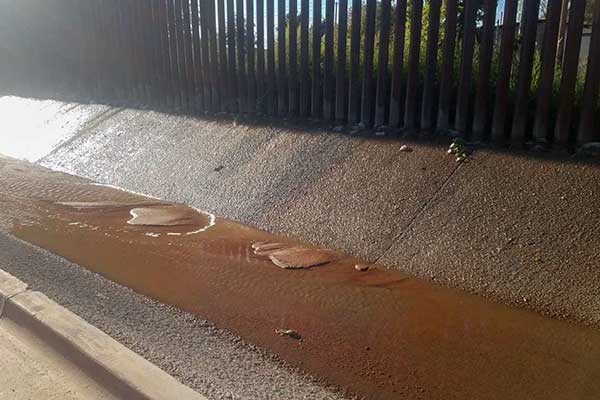 The Cochise County Board of Supervisors has declared a state of local emergency in response to the ongoing HAZMAT situation in Naco.

The move follows a leak of raw sewage from Naco, Sonora, onto U.S. soil on Sunday, September 9, which prompted an immediate response by the County to prevent a public health emergency. While that initial flow near the Naco Point of Entry was stopped and then contained, a second leak occurred in Sonora when the HAZMAT was diverted by Naco, Sonora, authorities to another pipe, which subsequently failed.

That HAZMAT has continued to flow west onto private property in the U.S. at a rate of between 288,000 and 432,000 gallons per day. Cochise Environmental Health has been monitoring the situation and continues to treat the HAZMAT with chlorine tablets.

Local residents are assured their drinking water remains safe, but they are urged to avoid the spill area and any standing pools of water.

At a special meeting of the Board of Supervisors this morning, County staff expressed concerns about the potential impact if the flow of HAZMAT into the U.S. be allowed to continue. The prevention of disease and water contamination is a top priority.

Although flows of sewage across the international border have occurred in the past, the current situation represents a 328% increase on previous incidents, said Cochise County Emergency Services Coordinator Gabe Lavine.

The flow initially traveled about three quarters of a mile west, but the water has since evaporated. The current flow is an estimated 50 to 100 yards across the border and continues to ebb and flow.

The County has continued to engage with state, federal and Mexican agencies in an attempt to compel a long-term solution to the issue – the County does not have the authority or resources to resolve this international border situation – but no progress has been made.

“We have requested assistance from the state to help with tests of the local water and soil,” said Cochise Health & Social Services Director Carrie Langley. “We are continuing to monitor the flow several times throughout the day and we continue to treat it with chlorine.”

In declaring a state of local emergency, the Board is looking to highlight the issue and bring state and federal attention to this ongoing situation.

In the meantime, the County will continue to respond to any future emergency situations arising from the flow of HAZMAT.

The County is planning a town hall meeting in Naco later this week to keep local residents informed of the situation. As an additional measure of public support and assistance the County is also planning to offer an immunization clinic to any area residents with health concerns.

Langley added, “Our number one priority is to safeguard public health and property and we are taking a proactive approach to ensure we meet that goal. The aim of the town hall is to keep residents informed and we will be available to answer any questions.

“The immunizations are a precautionary measure. We have no cases of any illnesses reported, but when you have a situation involving raw sewage it’s always good to be prudent.”

The County’s Office of Emergency Management has also put a response plan in place to deal with another anticipated flow near the Naco Port of Entry when repairs to the sewage pipes take place in Naco, Sonora.

It is not yet known which agency will carry out those repairs, but it is expected to take place within the next eight weeks. The flow will occur when the system is flushed out.