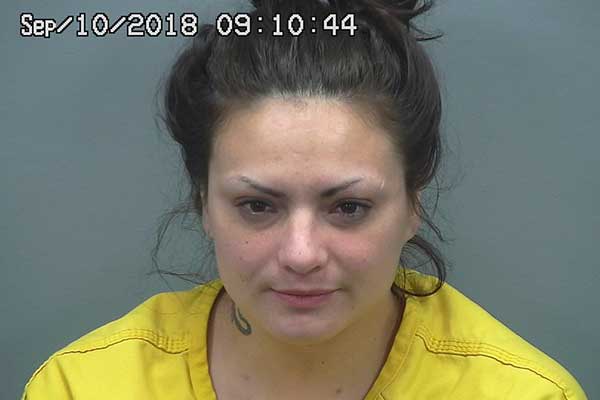 SAFFORD – Just after midnight last Monday, an officer was heading West on Highway 70 when he came across a vehicle driving the wrong way behind a man walking east in a one way merge lane that is only for west bound traffic off of 8th Avenue. The officer could hear yelling coming from the area of the car and man walking. When the man saw the patrol car, he quickly walked to the Mechy’s Restaurant parking lot where the officer pulled in. The other vehicle that was being driven by a female drove past but then pulled into the parking lot as well. As the officer spoke to the man, it was clear that he was intoxicated. The officer asked if they were arguing and who the female was. The man reported he did not know who she was, but that she was alright.

The female got out of the vehicle and was clearly unsteady on her feet, her eyes were blood shot and watery and she had slurred speech as she spoke to the officer. The woman identified herself as “Ashley” and was asked why she was following the man down the road. The officer could smell the odor of intoxicating beverages and her demeanor would change from happy to angry. When she was asked how much alcohol she drank, she stated that she drank a milk shake. She then reported her last name was Munoz. The officer asked the man for his identification, but was told that it was in the vehicle that Munoz was driving. The officer felt that both, the man and woman, did not want to appear to know each other. Another officer arrived, and Munoz went to speak with them because she no longer wanted to speak with the first officer. She continued to be very confrontational and antagonistic with the second officer and they were unable to reason with her. Based on the officers observations, Munoz was placed under arrest for DUI.   The man apparently told the first officer that he had upset Munoz for being at a local bar speaking to two other women. Munoz had made a scene and the bartender told her to leave or they would call the police. The man’s wallet was located with his identification, and when asked he stated there was a pistol in the vehicle. The man reported that it belonged to a relative, and he did not have possession of it. The officer checked but the pistol was not reported stolen, and so it was secured in the trunk of the vehicle. The officer made arrangements for the man to have the vehicle picked up by a sober driver.

Munoz continued to pull away as officers handcuffed her and after she was placed in the back of the patrol vehicle, the whole way to the police station she tried to get the officer to turn off his camera. When the officer refused, Munoz became enraged, hurling profanity and insults toward the officer. When Munoz got out of the vehicle, the officer noticed she had slipped a wrist out of the handcuffs and authorities re-secured the handcuffs. Officers continued to check the cuffs as Munoz continued to be out of control, thrashing around, yelling and screaming. A telephonic search warrant was granted for a blood draw. Munoz continued her tirade, and due to her being intoxicated she was taken to the Mount Graham Regional Medical Center to be evaluated for booking. After Munoz was cleared, she was transported to the jail where she was booked in on DUI and Domestic Violence related charges.