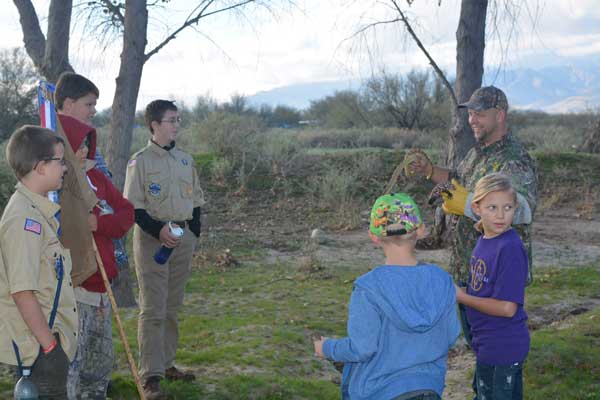 The boys and leaders were welcomed at 7 p.m. by EAC Dean of Instruction and Camporee Director, Dr. Phil McBride, who caught their attention immediately with a thermite reaction that included a blast of light, sparks, heat, flames and molten iron as the campfire came to life. 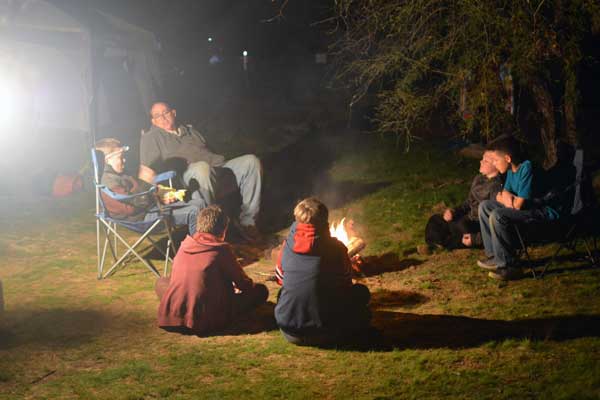 Contributed Photo: Boy Scouts settle in around a fire.

Next, the scouts participated in a range of nighttime activities. David Morris, EAC astronomy instructor, brought several of his students to lead the scouts in viewing stars, planets and the moon through telescopes and pointing out the constellations.

“It was amazing to look up at the night sky to view the wonders of the universe,” McBride said.

The scouts mastered a half-mile cat-eye compass course put together by Mark Madsen, retired EAC math instructor, which involved trekking through the desert at night with the aid of only a compass and directions to find 13 reflectors. EAC’s Discovery Park Campus director, Paul Anger, awaited the scouts at the Polaris Shuttle where they took a trip through our solar system, visiting several planets on their journey. By 10:30 p.m., the scouts and their leaders were worn out and ready for a good night’s sleep under the stars.

The Tigers patrol from Troops 5014-5015 of Central provided the opening flag ceremony early the next morning and the scouts were off to showcase their skills in a variety of activities. Tammy Gillespie, EAC biology instructor, had students identify types of rocks and demonstrated reclamation by carefully removing chocolate chips from a cookie. Duane DeSpain and Joel Shelton, both EAC chemistry instructors, invited the scouts to demonstrate their fire-building techniques by starting a fire without matches and then building that fire tall enough to burn a string tied between two poles. 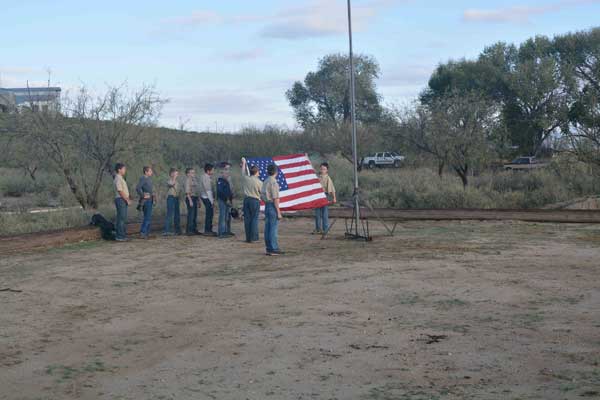 Willis Haws, EAC biology instructor, discussed the basics of food chains and then sent the scouts out to find evidence of food chains.

Tom Palmer, EAC engineering instructor, had a group of his engineering students on hand to guide the scouts in measuring the elevation between two points using modern survey equipment.

Dennis Griffin, EAC information resources coordinator, and Shawn Wakefield, EAC computer applications analyst, supervised the scouts as they used their knot tying and lashing skills to build a rope bridge across two trees and get at least two members of their patrol across the bridge.

Dave Henson, EAC science division chair, organized the scouts in a service project where they used shovels and picks to dig a foundation for the addition to the Chiricahua Leopard Frog Ranarium. 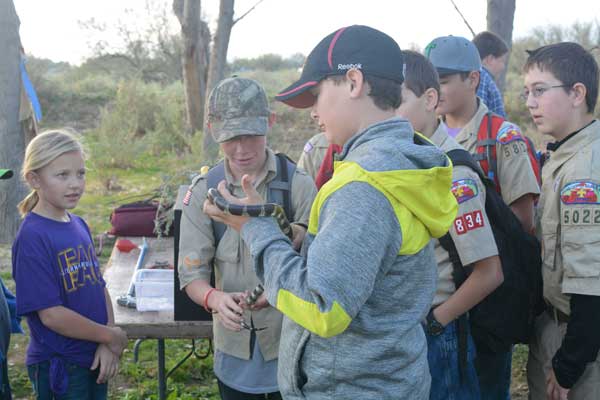 Contributed Photo: A Boy Scout gets personal with a snake.

“This event would not have been possible without the hard work of Paul Anger and other EAC faculty and staff,” McBride said. “We also express our sincere thanks to the scout leaders in our community for their sacrifice away from their families to provide valuable scouting experiences for these boys.”

The STEM Camporee was hosted by Eastern Arizona College with support from the National Science Foundation Grant, DUE# 1400687, STEM Pathways across Arizona: Improving Science Education through K-12/College/Community Partnerships. Eastern Arizona College invites the community to join us for some more exciting family STEM activities February 24-25, 2017, at our 3rd annual Gila Valley Health and Science Festival.

EAC to present Rhapsody: An Interdepartmental Collaboration in Music, Dance and Theatre