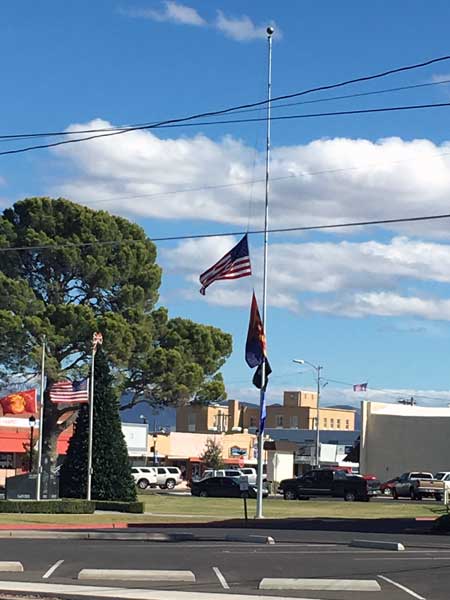 Brooke Curley Photo/Gila Valley Central: The flag at the Graham County Courthouse flied at half mast in reverence for fallen officer Darren Reed of Show Low.

SAFFORD – For those who lose their lives in defense of others, flags all over the state lower in tribute.

Arizona Governer Doug Ducey ordered all flags at state buildings to be lowered to half-staff immediately. An email from Communications Manager Heather Sheston states the flags were to remain at half-staff until sundown Thursday evening.

“Governor Ducey has ordered all flags at all state buildings to be lowered to half-staff effective immediately until sunset tomorrow, November 10, 2016, in honor of fallen Show Low Police Officer Darren Reed,” Sheston said, “Officer Reed was on duty when he was shot and killed. He served with the Show Low Police Department for 10 years and previously served with the Navajo County Sheriff’s Office. Officer Reed is survived by his wife and two children.”

Flags will be lowered once again the day of Officer Reed’s internment. Sheston encouraged other businesses and organizations to join in the tribute of officer Reed.

Our hearts go out to officer Reed’s family. We at Gila Valley Central would like to express our appreciation to our local law enforcement. Thank you for being our shield against the night.

A Shield Against The Night

A uniform, a gun, a badge upon your chest.
These things make not super beings …
just men and women, human like the rest.
Though sometimes taken for granted,
or even viewed with scorn or spite …
Some eyes see you for what you truly are …
A shield against the night.

At times your job is thankless.

Another shift has gone by,
and not a kind word is spoken,
not a single word at all.
Those endless hours spent filling out
reports bring nothing but boredom.
A headache rages in your skull.

You may ask yourself if it is really worth it?
There are many risks, no progress in sight.
The answer is a simple yes my friend,
for you are a cop, an officer . . .
A shield against the night.

An car overturned, a robbery, a chase,
consoling a victim, whispering all will be well.
A frightened child’s hand is held,
he is lost and out of place.
The call of duty is answered
no hesitation, no question.
A champion to those who can not fight.
You stand alone sometimes,
the only thing between the darkness
and the light.

A hero every minute, no matter how mundane the day.
Take pride in what you do.
Although very human,
You my friend . . . are
A shield against the night.