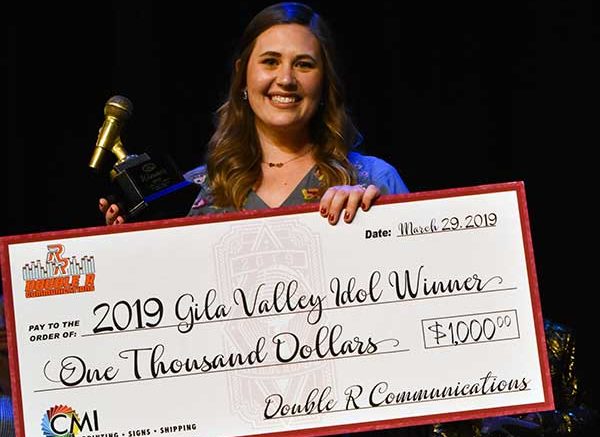 SAFFORD – Cierra Myers took first place in the 2019 Gila Idol competition held last night at the David M. Player Center for the Arts in Safford. Four other contestants placed in the competition:

The alternates were put up for a vote on Friday and the winner was announced on Kat Kountry 94.5 Tuesday morning. The alternate selected through that process only had several days to prepare for the final.

The competition was adjudicated by former Gila Idol Winners:

The judges commented throughout the evening about the level of talent represented at the show. Each contested exhibited an extremely high degree of proficiency, making it difficult to select a winner. 2018 winner Pete McCormick was a first-time judge for the contest. Toward the end of the evening when the judges had rendered their decision, host Reed Richins asked McCormick how he felt about having to whittle down the amazing performances to a single winner. McCormick replied, “It sucks!”

87 people signed up for the competition. A few dropped out before the preliminary and some had scheduling conflicts that forced them to drop out.

Former Idol winners also performed during the show. 2008 winner, Adam Crohn, opened the show with a Neil Diamond song that got the audience singing along. Ethan McBride and Olivia Jeffs performed a duet accompanied by Jeff’s brother Evan Crockett on guitar.

Watch videos of the performances and pictures of the winners here.