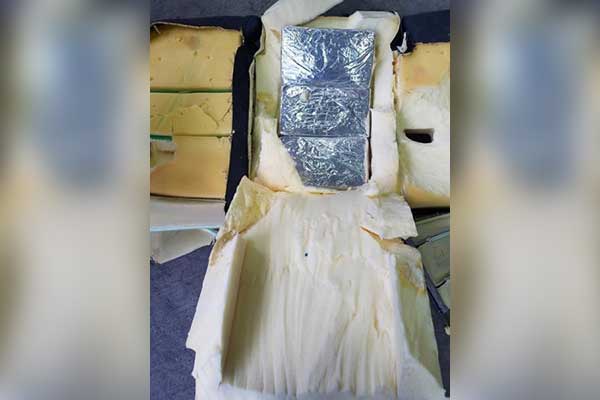 TUCSON, Ariz. – U.S. Customs and Border Protection officers at the Port of Nogales seized nearly 19 pounds of cocaine from a 29-year-old man as he attempted to enter the U.S. from Mexico yesterday.

CBP officers at the DeConcini Crossing referred the man for further inspection of his Ford sedan, where a K-9 alerted to the vehicle, leading officers to discover several packages of cocaine concealed in the backseat. The drugs have an estimated street value of nearly $500,000.

Officers seized the drugs and vehicle. The subject, a Mexican national, was arrested and turned over to U.S. Immigration and Customs Enforcement’s Homeland Security Investigations and Drug Enforcement Agency.

Individuals arrested may be charged by complaint, the method by which a person is charged with criminal activity, which raises no inference of guilt.  An individual is presumed innocent unless and until competent evidence is presented to a jury that establishes guilt beyond a reasonable doubt.

CBP’s Office of Field Operations is the primary organization within Homeland Security tasked with an anti-terrorism mission at our nation’s ports. CBP officers screen all people, vehicles and goods entering the United States while facilitating the flow of legitimate trade and travel. Their mission also includes carrying out border-related duties, including narcotics interdiction, enforcing immigration and trade laws, and protecting the nation’s food supply and agriculture industry from pests and diseases.