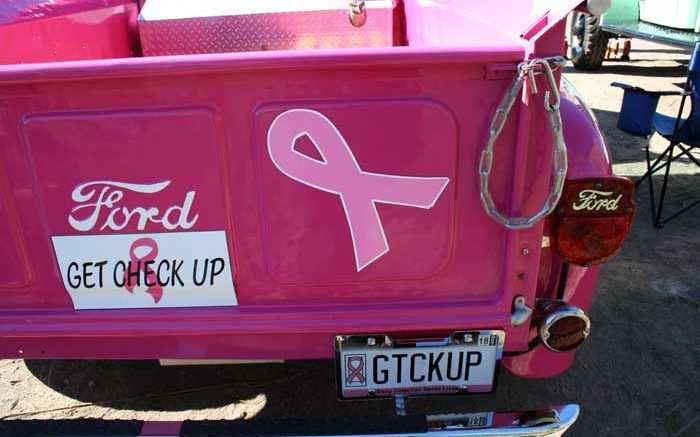 Photo By Walter Mares: Buzz Pilgrim's pink truck not only raises eyebrows but also awareness regarding cancer, which took the lives of the truck's previous two owners.

The bright yellow and deep black jalopies were definitely standouts. So were the three motorcycles entered in the second annual Clifton Festival of Lights Car and Motorcycle Show. All told, there were 19 vehicles ( including the three cycles) in the Dec. 3 show held at the American Legion in Clifton.

The competition was strong and included a vintage milk delivery truck owned by Peter Pollock of Clifton and Jess Stillman’s 1966 Power Wagon, fully restored and painted a light green. However, despite all the beautifully restored classic rides, especially the jalopies, the 1951 Ford pickup truck owned by York Valley’s Buzz Pilgrim was most certainly among the strongest eye-catchers. It also has a very interesting history. 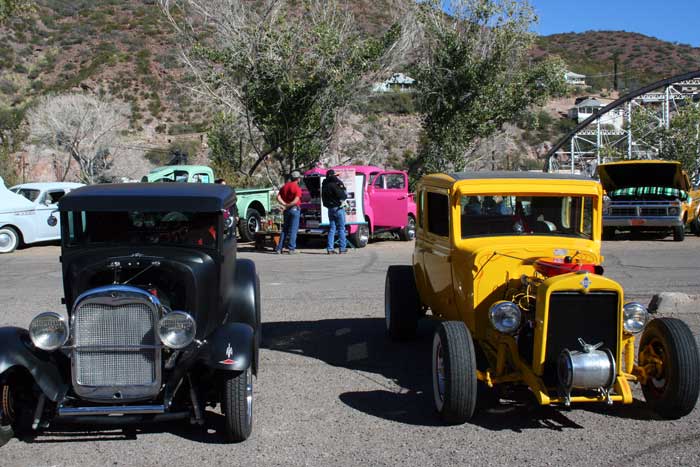 Photo By Walter Mares: These handsome yellow and black jalopies were a big hit at the second annual Clifton Festival of Lights Car Show. The event, held at American Legion Post 28 in Clifton on Dec. 3, were a welcome addition to the festival, which observed its 20th year.

Besides its full restoration, Pilgrim’s 1951 Ford pickup truck is painted a bright pink.  It is not exactly what one might consider a manly or macho color compared to other entries, but to Pilgrim, the color carries a great significance. The pink is meant to send a message about the fight against cancer and breast cancer in particular.  Nationally,  pink has been adopted by several programs and organizations, especially those focusing their efforts on breast cancer.

Pilgrim, who is a cancer survivor, said his truck’s color is meant to get the point across for people to receive checkups for the disease. A placard placed in front of the truck, which gives its history, reads “We hope lives can be saved by awareness.” The vehicle rear license plate also emphasizes having checkups with the letters GTCKUP. The plate also has a pink ribbon. 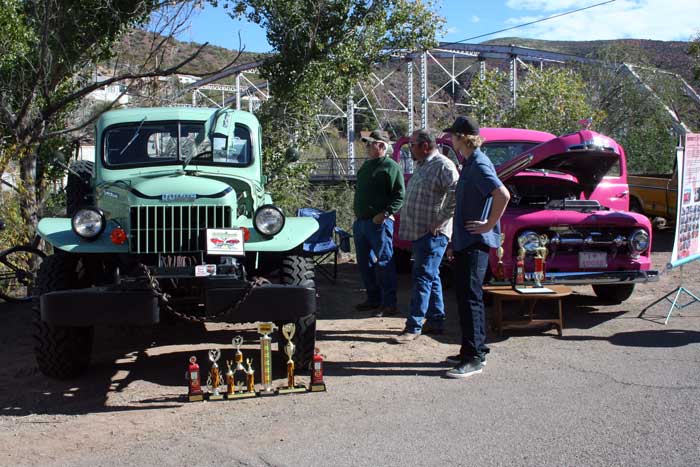 Photo By Walter Mares: Buzz Pilgrim, rear center, Jess Stillman and another man reflect on their entries at the second annual Clifton Festival of Lights Car Show held at the Post 28 American Legion in Clifton on Dec. 3. Stillman’s entry is the light green 1966 Power Wagon. Pilgim’s is the pink 1951 Ford pickup truck, which he had painted pink to raise awareness for breast cancer. Pilgrim is a cancer survivor. He also has relatives who died of the disease. Trophies in front of the vehicles were won at various car shows, including a major show in Silver City, N.M. The Clifton festival is in its 20th year.

The placard has several photos recording the work that went into the truck’s restoration. It was originally a grayish white. The photos show everything from the truck’s transmission when it taken out of the vehicle for repair, to its final restoration, including the pink paint job.

The truck was previously owned by Pilgrim’s uncle, Lee Gist, of Snake River, Idaho. Gist bought the vehicle in 1973. He died of cancer and the truck was inherited by his son, Tom, who died shortly after, also of cancer. Pilgrim obtained the truck and brought it from Idaho to his home in Greenlee County.

The restoration took three years. Rick Lawrence, who is also Lee Gist’s nephew, did most of the mechanic’s work. Guy Crawford did the pink paint job. Pilgrim includes in the placard a big thank you to “Our five drunk rednecks who did the body work.”

The car show at the American Legion was organized by Edward Nabor, of Clifton. He said he felt the show was a definite success and looks forward to having more entrants in 2017. Nabor has been on the Clifton Festival of Lights organizational committee since the festival’s inception 20 years ago.