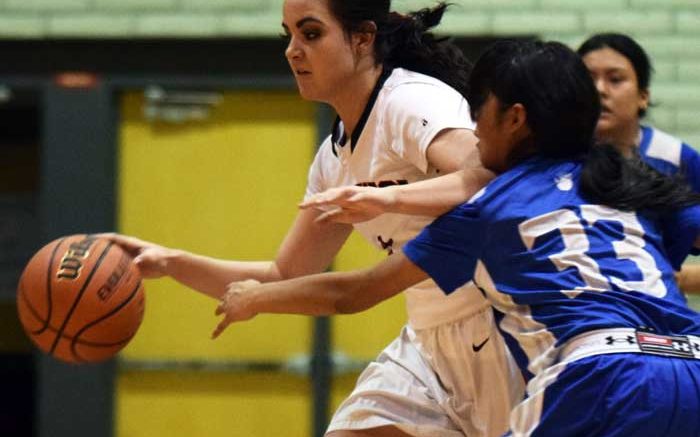 A heart-breaking one-point play-in contest loss ended Morenci’s 2017 season in Wildcat Memorial Gymnasium on Feb. 10. The Keams Canyon Hopi Bruins left with a 52-51 state tourney pass, redeemable Friday, for the first round in the Prescott area. 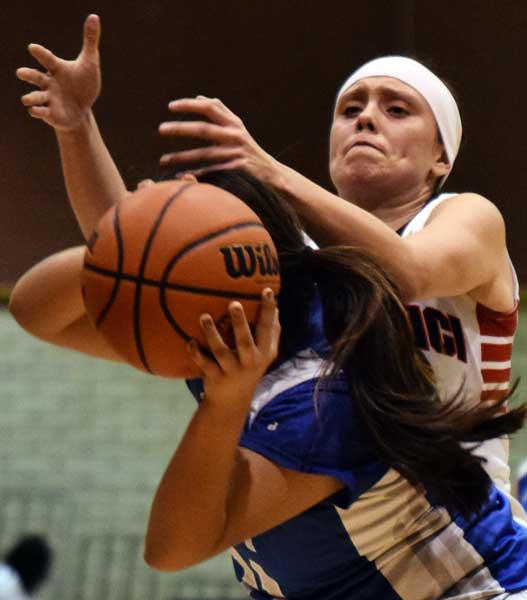 The state tourney will have a 16-team field beginning single-elimination first-round play Feb. 17 and concluding in the Prescott Valley Events Center on Feb. 25.

The visitors controlled the opening tip and scored the contest’s initial basket with 1:22 elapsed in the game. Morenci tied it 32 seconds later, and Hopi went on a 10-7 spurt to lead 11-9 before a Sabyn Martinez basket knotted the score at 11-11 with 1:48 left. A Krystyna Chavarria basket gave Morenci a 13-11 advantage 34 seconds later, and the period ended with the 2-point edge. 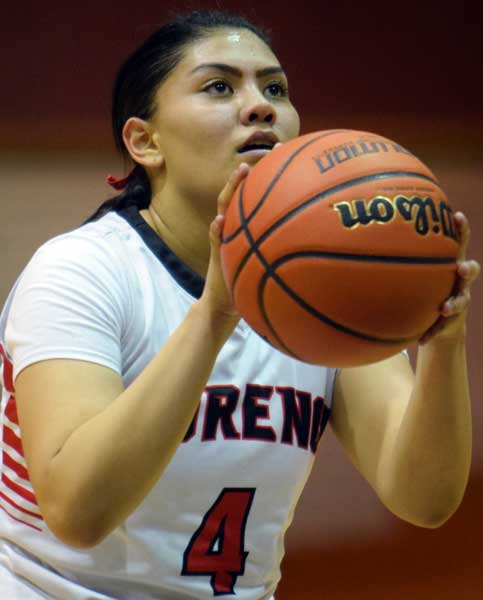 Photo By Raymundo Frasquillo: Morenci senior Krystyna Chavarria (4) draws a bead on the basket to score a free throw against Hopi. Chavarria had a game-high 18 points, 11 rebounds and three steals.

Chavarria and Martinez baskets within the first minute of the second period extended the margin to six, a Chavarria 3-pointer verses a free throw made it eight points two minutes later. Three of four Chavarria free throws plus a Janeene Lang basket verses a Bruins basket gave Morenci an 11-point advantage, 25-14, by the time Hopi scored another basket with 3:11 left in the half.

The Bruins chipped away at the deficit, however, adding a couple more baskets verses a free throw until the deficit was six with two minutes until the half ended.

A Martinez free throw and 3-pointer gave the Wildcats the last lead they would have in the second half, 31-27, within the opening two minutes. Hopi unleashed five more 3-pointers by three different players in the period, taking a 5-point, 44-39, advantage after a 17-12 outing.

Hopi’s eighth 3-pointer, with 13 seconds elapsed in the final eight minutes of play, gave the Bruins a 47-39 advantage.

An Ashley Hernandez lay-up plus three consecutive Jadye Rivas baskets coupled with a pair of Martinez free throws verses a Jaede Honani three-point play, brought the deficit to one, 49-50 with two minutes remaining. 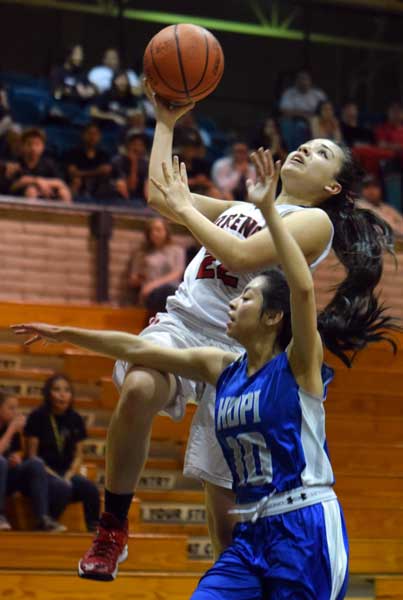 Hopi scored a basket with a minute left, and Morenci added a pair of Chavarria free throws with 5.6 seconds remaining, but that would be the extent of the scoring for either team.

Morenci outscored Hopi 12-8 in the final period, but it was not enough. Instead of preparing for the state meet, the Wildcats will inventory equipment this week.

“I thought we could power them inside,” Morenci head coach Steve Chavez said. “We had two scouting reports on them, but we didn’t know about their little quick guard. She hadn’t played in either game we knew about. She was the difference. I told her so after the game and wished them a safe trip home.”