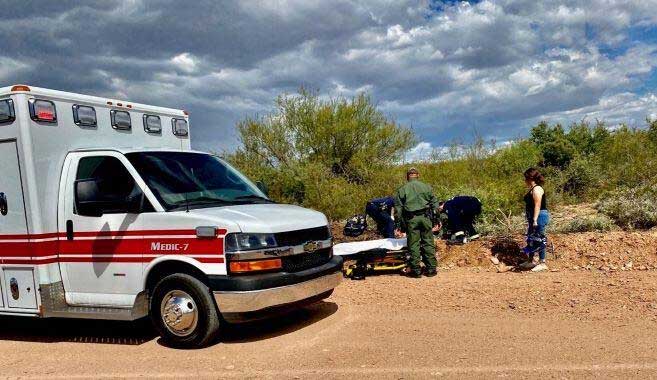 Agents responded to the scene of an ATV accident

TUCSON, Ariz. – U.S. Border Patrol agents helped save the lives of two people in separate incidents near Three Points and Douglas, Arizona, over the weekend.

Saturday afternoon, Tucson Sector agents patrolling state Route 86 were flagged down by two women standing beside a parked car. Their male companion was unresponsive in the vehicle’s back seat, possibly from a drug overdose.

Recognizing the severity of his condition, agents immediately began CPR. Minutes later, Three Points Fire medical personnel arrived and continued treatment until the man regained consciousness. The agents then diverted traffic to create a landing zone for the air ambulance that arrived to transport the man to a local hospital.

Sunday afternoon, an agent patrolling just east of Douglas was waved down by a man whose daughter had suffered an ATV accident a short distance up the road and was unconscious.

Agents trained as emergency medical technicians (EMTs) converged on the area. They stabilized the girl and continued lifesaving care until Douglas Emergency Medical Services arrived to transport her to a local hospital via ambulance.

“Our men and women go out every day to keep our communities safe,” commented Tucson Sector Chief Patrol Agent Roy Villareal. “Many times they start their days in a law enforcement capacity and end them as medical first responders. I am truly proud of these heroes in green.”

Tucson Sector has over 240 Border Patrol agents certified as EMTs and nearly 50 agents on the Border Search Trauma and Rescue (BORSTAR) Team.