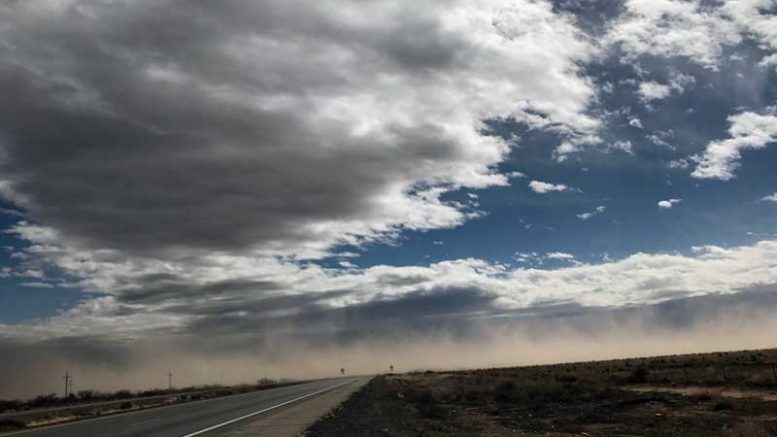 Contributed Photo: Blowing dust from David R. Turner's farm near San Simon has closed I-10 for the third straight day. Turner removed a stabilizer on 50 acres this week to prepare for planting, but winds arrived, causing him to have to cancel his plans.

COCHISE COUNTY – Arizona authorities have shut down Interstate 10 at San Simon near the state’s border with New Mexico for the third day in a row due to blowing dust.

I-10 is closed in both directions. Westbound I-10 is also closed at Lordsburg, New Mexico, and the eastbound side is closed at the junction with U.S. Highway 191.

The Arizona Department of Environmental Quality says the area near San Simon is affected by the same farm that had blowing dust issues last year, costing the state at least $288,000 in efforts to stabilize the soil. The farm is owned by David R. Turner, who eventually agreed to cease any tillage of his land, water it and apps a chemical stabilizer to form a crust. Turner was slow to comply, however, and the state pursued penalties up to $10,000 per day.

Turner originally agreed to apply a “tackifier” to 320 acres of his land closest to I-10. Turner owns 640 acres in the area.

The farm removed the stabilizer on 50 acres this week to prepare for planting, but winds arrived, causing them to have to cancel their plans.