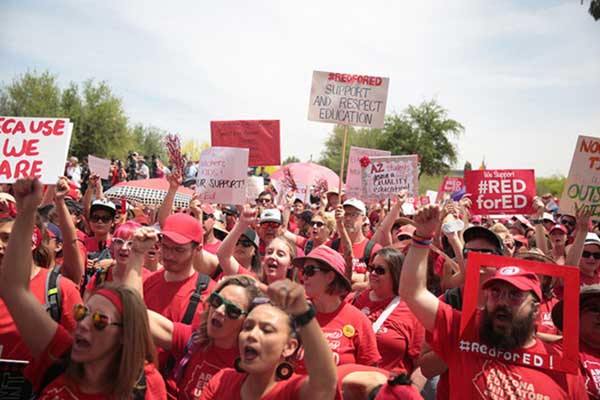 — Teachers nationwide are wearing red today in support of public education. Here in Arizona, educators are vowing to continue to fight for better schools in the state, despite an education funding initiative that was blocked from ballots.

The state Supreme Court last week removed an initiative from Arizona ballots that would have raised an estimated $690 million for schools through a tax increase on the wealthiest 1 percent of Arizonans. Joshua Buckley is a high school teacher and chaired the committee backing the ballot measure.

The Invest in Ed proposition qualified for November ballots with more than 270,000 petition signatures. Polling from the group FM3 Research suggested the proposition would have had support among nearly two-thirds of Arizona voters.

But the Arizona Chamber of Commerce and Industry sued to block the measure, saying it would hurt the state’s economy. And the State Supreme Court found the petition did not make clear that the proposition would have changed the state’s system for indexing tax brackets to adjust for inflation.

Buckley said with the initiative off the ballots, education supporters will instead focus their energies on candidates in state and local races.

“I think education is a number-one issue in this election,” he said. “So we’re paying attention, and we’re going to get out there and vote and help people get elected who want to help public education.”

After a statewide teacher walkout last spring, the state Legislature agreed to give Arizona teachers a 20 percent pay raise over three years. But educators say much more classroom funding is still needed. According to the National Education Association, Arizona’s per-student spending is among the lowest in the nation.