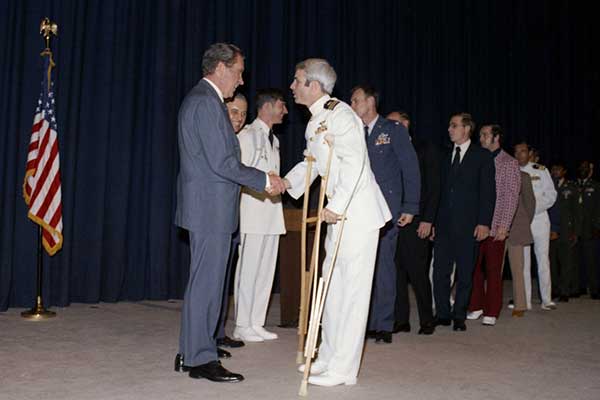 We’ve all seen the grainy video (below story).

A young man, in his 30s, emerges from behind the folding doors of a bus. Plows forward with strength. His feet land on the ground, and he limps forward — towards freedom.

It’s John McCain. And he’d just spent five years as a prisoner of war. Shot down. Ejected from his plane. His right leg and both arms broken, he managed, miraculously, to save himself from drowning in the lake in which he landed, only to be captured by the North Vietnamese.

No one expected John McCain to make it through the night, but as one of his fellow POWs put it: “Dying was not in his plan.”

Confined to solitude. Tortured. This son and grandson of Navy admirals, repeatedly refused release until every other American brother was released with him.

Of all the speeches, interviews and town hall meetings that have been played and replayed in these days since John McCain has left us, it’s this moment more than any other that can’t help but stir a spirit of patriotism deep inside every American — bringing goosebumps to your arms and leaving the hair standing on the back of your neck.

Because as you watch his release and learn his story, the Senator’s life, lessons and wisdom take on a much more meaningful context.

When John McCain called on us to “serve a purpose greater than one’s own self interest” — it wasn’t a talking point designed to win the next election. It was how he had actually lived his own life, and continued to live his life. It’s how he wanted all of us to live ours.

His talk of “Country First” wasn’t simply a slogan on a yard sign. It was what John McCain had done and demonstrated. Over and over and over again — in the Navy, through Vietnam, and all the way to his favorite battles, on floor of the United States Senate.

In 2008, he electrified an arena in Minneapolis, proclaiming: “We’re Americans, and we never give up. We never quit. We never hide from history. We make history.” These weren’t the empty words of some politician grabbing the microphone and the spotlight for a few fleeting moments. Men had followed John McCain into battle — and we knew we could do the same. This man was trusted, and he was tested — qualities in increasingly short supply.

We think sometimes that politics is life and death. But John McCain knew better — because he had actually seen death, and dying, and tragedy. Make no mistake, he fought like hell for the causes he believed in. He plowed through election after election with the energy and focus of a warrior.

But along the way he did it with humor and humanity, and without compromising the principles he held so dear. “I’d rather lose an election, than lose a war,” he affirmed. And we knew he was telling us the truth.

In that way, John McCain was about more than politics — he brought us above politics. John is probably the only politician who could get us to set aside politics and come together as a state and as a nation — as we have.

Like many of us here in Arizona, John McCain came from somewhere else. But his spirit, service and fierce independence ultimately helped shape the state with which he became synonymous.

Almost exactly 20 years ago, John McCain delivered the eulogy at Barry Goldwater’s funeral — that other great legendary Arizonan who America holds dear in our hearts. Where Barry Goldwater was born in Arizona; John McCain was Arizona’s favorite adopted son.

Nearly 45 years old when he moved to Arizona — this was the first place, he said, where he truly found a connection. “Arizona has enchanted and claimed me,” he wrote. “I love it so much. And I am so grateful for the privilege of representing the state and its people.”

But in reality — we were the ones who were privileged. Privileged to have John McCain fighting for us. Privileged to learn from him. Privileged — when he was back home — to run into him at the movies, or at a ball game, or at Starbucks — just like he was any one of us. Privileged to proudly call him a fellow Arizonan.

To the woman who brought John McCain to Arizona. The hearts and prayers of not only Angela and I — but our entire state and nation are with you and your family at this moment.

Always known for your elegance, grace and compassion — all those qualities have been on full display over this past year. You are a model for all of us, and an inspiration. Arizona loves you, Cindy McCain.

To the woman who brought John McCain into the world, Mrs. McCain, Roberta, 106 years young — you raised a remarkable son, and we are truly blessed to have you among us still.

When we look to you, there is no doubt where John McCain inherited his determination, resilience and tenacity — it was built into his DNA.

You see it in John’s children — who carry on his spirit of service. Doug, Andy, Sidney, Meghan, Jack, Jimmy, and Bridget. May God bless all of you. We know your father was very proud, and so is the state of Arizona.

In May, Angela and I had the great honor of visiting with John and Cindy at their cabin. Before lunch, the Senator broke the ice by sharing what was weighing on his mind, more than anything else. Breaking into his signature grin, he said: “My biggest challenge is deciding whether or not to run for reelection in 2022.”

“Dying,” as had been observed 50 years earlier, “was not in his plan.”

John McCain was a fighter, and he called on us to fight with him.

For American values. For the ideals and character of a free people. For justice and opportunity for all. For each other and for this blessed and bountiful country.

So while we grieve today — as a state and as a nation — John McCain’s fight for America isn’t over.

It’s a fight all Americans are obligated to continue on his behalf.

And as we march forward with the courage and resolve he would have demanded, may we take comfort knowing that in that fight — John McCain will always have our back.