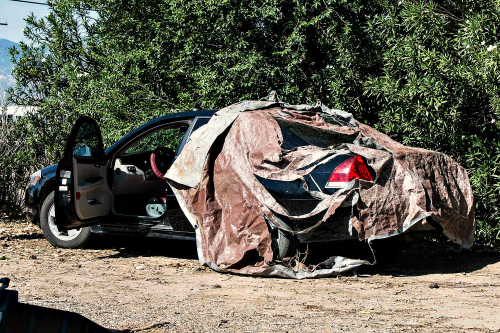 Contributed Photo/Courtesy Charlie Scrofano: This stolen car was found under an old tarp in a backyard. The suspect, Andrew Placencio, also allegedly set fire to a truck, ATV and residence.

SAFFORD – Residents of the Sunrise Village Mobile Home and RV Resort had a rude awakening Thursday morning when an alleged arsonist set two vehicles and a manufactured home on fire.

The suspect, Andrew Placencio, 20, of Gila, New Mexico, fled the scene in a stolen car but was soon apprehended in the park. He was arrested and booked into the Graham County Jail on charges of arson and theft of means of transportation. 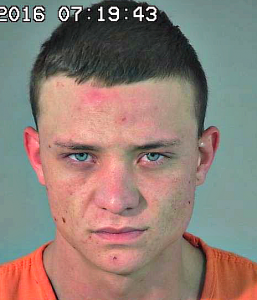 Contributed Photo/Courtesy GCSO: Andrew Placencio was booked into the jail on arson and car theft charges.

Police and firefighters were dispatched at about 8:04 a.m. to the northwest corner of Sunrise Village at 900 E. Hollywood Dr. regarding a large fire. Upon arrival, they located a 2016 Ford F-150 pickup truck and a Honda ATV completely engulfed in flames.

While officers were assessing the fire situation, they were told a black Chevrolet Impala had been stolen by a male subject who left the scene of the fire. That information helped lead authorities to discover Placencio and the stolen vehicle after other residents reported a suspicious car in their backyard. 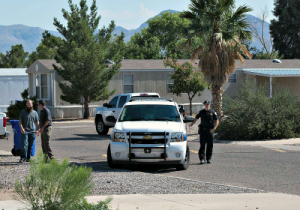 The Safford Fire Department doused the fire and made sure it didn’t spread to more property. Chief Clark Bingham said the fire was set intentionally.

“There was a fire, (and) they have the suspect in custody,” Bingham said. “There was a Ford F-150 that was burned, and a four wheeler and an unoccupied mobile home that was damaged. It was purposefully set.”

Charlie Scrofano was eating breakfast with his wife when he discovered the stolen car in his backyard, partially covered by an old tarp of theirs.

“Linda and I where having breakfast when the dog started barking,” Scrofano said. “Linda looked outside and saw a black car parked behind the house.”

After alerting authorities, the Scrofanos learned the car was stolen. Linda Scrofano had also noticed a young man next door who she did not recognize. The man turned out to be Placencio, and, after being questioned, he was taken into custody without incident.