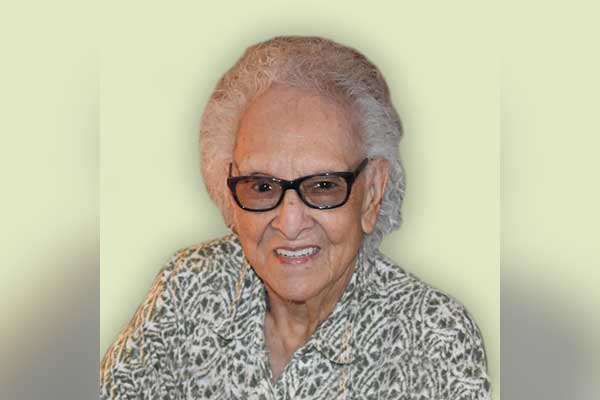 Alice Reynolds 91, of Safford, passed away peacefully on December 18, 2019 at Tucson Medical Center in Tucson, Arizona. Alice received visits from her children and family members and her poodles, Zoe and Chica, up until her passing.

Alice was born on March 23, 1928 in Magdalena, New Mexico. She was the third child born to Cresencio L. Molina and Rosalia Villalobos. Alice and her siblings were raised in New Mexico, Arizona and California, as her father was employed by Santa Fe Railroad. She loved reminiscing of her childhood in Arizona, camping in the Grand Canyon, picking pinon nuts, which her dad roasted over the campfire, feeding the deer, taking walks and playing tag with her siblings. As a young child, Alice was taught how to knit. She learned to knit lap blankets and argyle socks. The items she knitted were given to the local hospital for the patients, some of which were soldiers. Later in life, Alice would knit ponchos and sweaters for her daughters and knit Barbie clothes for their dolls. She entered some of her knitted items at the fair in Safford which won her a few ribbons.

After Santa Fe Railroad transferred the family to Blythe California, Alice met her future husband Paul, at the Busy Bee Café, where she worked as a waitress. Paul was in the Air Force, stationed at March Field Air Force Base in Riverside, California. They courted for a while and were married on November 10, 1952 in Quartzsite, Arizona. They were married for 56 years. Alice always gave of herself as a loving and devoted wife and mother to their five children.

She took after her dad’s love of fishing and spent time camping and fishing with Paul and the kids on the Colorado River in Blythe. As a mother of five, there was never a dull moment in the house, but somehow, she managed to keep her cool and keep everyone in line.

Family was everything to her. She loved spending time with her children, but spoiling her grandkids and great-grandkids was her specialty. Her great-granddaughters, Gianna, Bella, Teiah and Noah, dubbed her ” ALICE the GREAT” which stuck. The grandkids and great-grandkids knew “Alice the Great” would have their favorite snack and treat for them at her house but, if she didn’t have it, she would make sure to have it for them the next time they would come by to visit her.

New Mexico was a love for Alice. She was fascinated by the culture and traditions of her heritage. She would read everything about the towns, people, artisans, and especially the history that was part of her early upbringing. It brought great joy to her when she would share her stories with us.

As a military wife and mother, Alice was a very active member of the American Legion Auxiliary, Lopez Hernandez Post 95 in Solomon and the VFW Hall in Thatcher. She served as Auxiliary President for many years and was proud to give of her time and service to the Military families in her community. She met and made great friendships with many comrades of the American Legion Auxiliary. She cherished every one of the events, fund raisers and especially the women she met along the way.

Alice’s sweet poodles, Zoe and Chica, gave her joy and comfort as well as companionship. They were the welcoming committee every time someone stopped by to visit. There are so many people that knew and loved our ” Alice the Great”. She was a very loving person and was thankful for all of you in her life. She was a tiny little thing, but she was one tough cookie.

Alice is preceded in death by her parents, Cresencio and Rosalia, her sisters, Pauline Pena, Helen Naranjo, Carmen Holahan and brother Chris E. Molina, her husband of 56 years, Paul D. Reynolds, her son, Paul David Reynolds Jr. and granddaughter Melinda S. Rogers. She is survived by her five children, Larry G. Reynolds ( Terry ), Dale S. Reynolds ( Clara ), Joseph M. “Mike” Reynolds ( Elsie ), Claudia A. Rios ( Marvin ) and Pauline M. Reynolds. She was blessed with 11 grandchildren, 21 great-grandchildren and 7 great-great-grandchildren, with one on the way, due May 2020.

“Alice the Great” is pictured with her newest great-granddaughter, Olivia Joann Rios, born this past October. She said, she was so happy and blessed to be here to meet and hold Olivia. It truly shows in her face and beautiful smile.

Graveside services will take place at noon, on Saturday, January 4, 2020, at the Safford Cemetery. Immediately following the service lunch will be served at the American Legion Hall in Solomon.