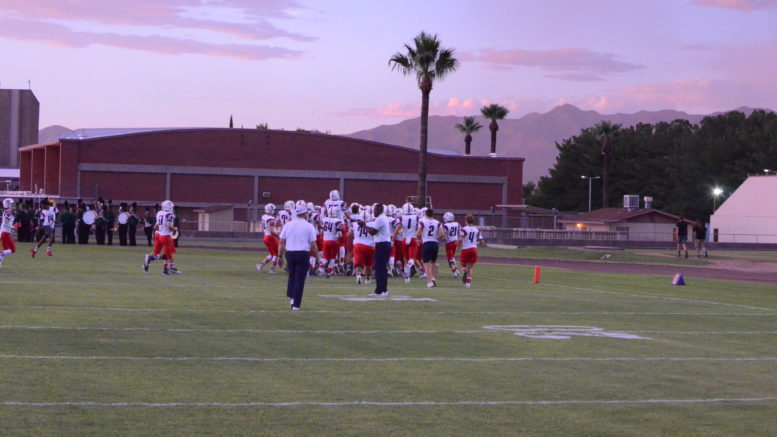 The ALA-QC Patriots team huddles before their game Friday in Thatcher. Photo by Lee Patterson

THATCHER – It was bound to happen and it did Friday night at Eastern Arizona College. 3A American Leadership Academy – Queen Creek ended Thatcher’s 20 game winning streak with a resounding 54-25 win over the Eagles.

ALA-QC took the opening kickoff and held onto the football for more than 7 minutes en route to their first of six passing touchdown from Rand Jensen. Jensen would end the night with 376 yards to go with his 6 touchdowns.

Thatcher answered back after an 86 yard kickoff return from Bretton Dodge and 3 plays later QB Mark Wren punched in an 11 yard TD run. The Eagles missed the PAT and trailed 7-6.

The teams would trade two more scores in the 1st quarter but Thatcher never held the lead. Then with 8 minutes to play in the 1st half the Patriots offense exploded for 21 unanswered points to take a huge 35-13 halftime lead.

Thatcher would add another Wren rushing TD and a 45 yard touchdown pass from Wren to Kyle O’Donnal but their defense couldn’t slow down the prolific passing attack of ALA-QC.

Thatcher’s road doesn’t get much easier as they travel to Show Low next week to take on the 2-0 Cougars.