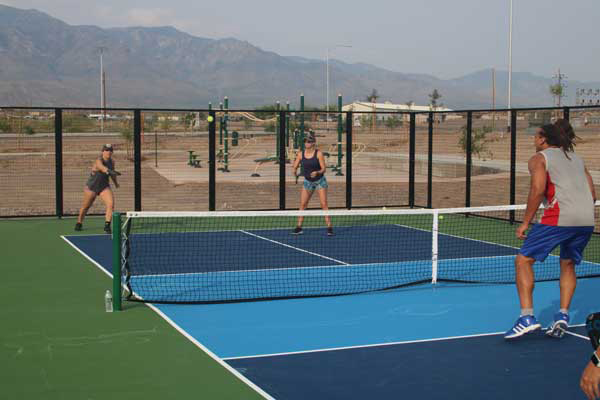 THATCHER — Even though the majority of Thatcher’s new park remains under construction, one area is already being used.

The Gila Valley’s first courts dedicated to pickleball have been used by players every morning this week.

In addition to the two courts at Thatcher’s Recreation Complex, at 8th Street and Reay Lane, the town has proposed replacing the outdoor basketball courts near the tennis courts at Thatcher High School, and converting that space into more public pickleball courts.

Pickleball is similar in structure to tennis; however, the court is much shorter, which allows people with limited mobility to play. Players use a smaller racquet — more akin to a large table tennis paddle — and a waffle ball is used, which allows for longer volleys.

In addition to the pickleball courts, the recreation complex will include soccer fields, softball diamonds, disc golf and a music amphitheater.

On his blog, Thatcher Town Councilman Ryan Rapier said, “When fully completed, this new complex will have the potential to be a major draw not only for residents of Thatcher and neighboring communities, but also for much of Southeastern Arizona and beyond.”

Rapier is leading investigation into the feasibility of developing a recreation center in conjunction with Pima, Graham County and Eastern Arizona College. The rec center could include athletic courts that could be used for basketball, volleyball, pickleball and wrestling; an indoor pool complex that could possibly include a warm water leisure pool, a cool water lap pool and a hot water wellness pool as well as a water recreation area for families; indoor racquetball courts; an indoor walking/jogging track; an aerobic/high fitness studio; and an ADA compliant wellness area that could possibly replace the current EAC Wellness Center.