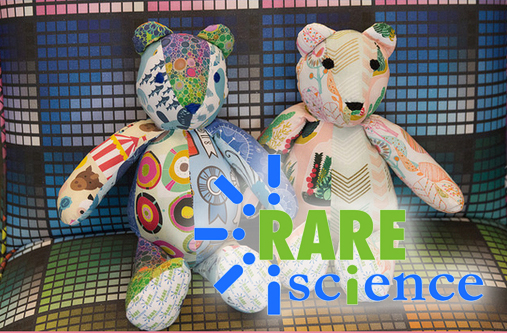 Rare Science is a nonprofit research organization for patients who suffer from extremely rare diseases. Kathy Martin, co-owner of The Jack of Arts on Main Street, is a member of the Rare Bear Army. As a group of volunteers, they unite in the quest to help children who face the overwhelming adversity of having a rare disease. Well-known diseases receive more funding, while those who suffer from rare diseases have very little aid because there is so little known about them.

By constructing and selling the stuffed bears, Rare Science is raising money to sponsor the needed research for these rare diseases. Although the pattern is always the same, each bear is unique because every seamstress creates the bears with their own color coordination style. No two bears are exactly alike, making them as rare as the diseases.

Kathi Martin has begun a personal quest to create one hundred bears. “I’ve got thirty-five cut. March nineteenth will be an all-day sew-a-thon,” Martin stated, “If you want to come down and help us on March 19th or any Wednesday night, you can call us at the store. We’re on the web at TheJackofArts.com.”