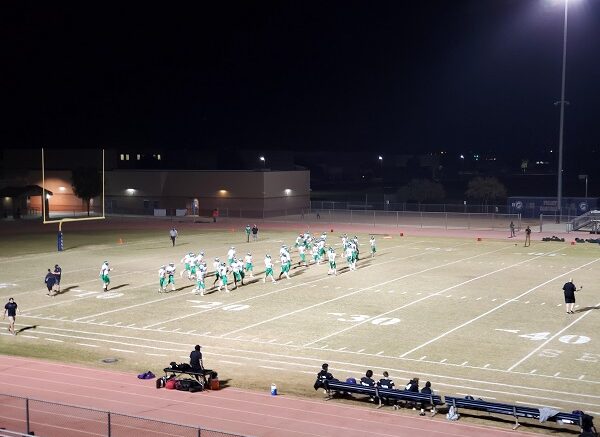 Thatcher warms up Friday before their game with ACP. Photo by Lee Patterson

GILBERT — Ask anyone who watched Thatcher play the last 5 weeks and they will tell you that the Eagles might be the toughest #12 seed in any tournament this year. That includes Arizona College Prep Head Coach Myron Blueford, who during pregame acknowledged this was a much closer match up.

“When we saw Thatcher on the line next to us, we knew we had better be ready,” said Blueford.

The Knights scored on the opening drive of the game on a 32 yard strike from Mark Chavez to Bryce Chen. The drive ate up nearly 6 minutes of the quarter before the Eagles even touched the football.

Thatcher countered back with a 70 yard score from Mark Wren with 9:15 to play in the 1st half to tie the game at 6. Wren would give the Eagles the 12-6 lead on their next drive with a 12 yard run. That lead wouldn’t make it to halftime though. ACP safety Joel Diaz picked off a Wyatt Larson pass and took it to the house 35 yards untouched to give the Knights a 13-12 halftime lead.

The Eagles returned the long drive favor to start the 3rd quarter a they capped off a 7 minute drive with a Brandon Napier to Brayden Oliver 16 yard toss. The Eagles would add on the two-point conversion to take the lead once and for all 20-13.

ACP added a 37 yard field-goal by Jett Uzell to inch closer but that was as close as they would come. Wren added his third score of the night on a 68 yard scamper with 1:12 to play in the 3rd quarter to stretch the lead to 27-16.

The Knights found the endzone one last time with 11:19 to play in the game with the second Chavez to Chang connection but failed to get the two-point conversion and the Eagles held on 27-22.

“We had a great game plan and executed it,” said first year Thatcher coach Dan Jones.

Wren led the Eagles on the ground with 253 yards on 25 carries and the 3 touchdowns. Napier was 3-3 passing with the strike to Oliver.

Thatcher is the #8 seed in the quarterfinals of the 3A tournament. The team’s were reseeded after Friday’s games. They will take on #1 Yuma Catholic on Friday at 7pm in Yuma.