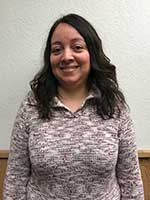 SAFFORD – Receiving more than half of the ballots cast, Heidi Torrio is the new Clerk of the Graham County Superior Court.

“I’m super excited,” Torrio told Gila Valley Central. “I want to thank everyone who supported and voted for me. It really means a lot to me.”

On her campaign Facebook page, Clonts said, “Thank you to all of you that voted for me and for your support throughout this campaign. It was a pleasure to get to know more of the great people in this great county and appreciate the kindness shown to me. I wish Heidi Torrio well in her new position.”

There were 12 overvotes and three undervotes. Hannah Duderstedt, director of elections for Graham County, said about 200 provisional and late early ballots remain to be counted, not enough to change Tuesday’s outcome.

Torrio will assume the office after the vote has been canvassed by the Graham County Board of Supervisors.

Woodman was recalled by voters after staff in the Clerk’s Office claimed she created a hostile work environment, resulting in high staff turnover.

Woodman was also alleged to have mishandled evidence in a criminal case, resulting in Superior Court Judge Michael Peterson writing about the situation in the Clerk’s Office to the chief justice of the Arizona Supreme Court.

Chief Justice Robert Brutinel issued and administrative order removing Woodman from day-to-day operations of the Clerk’s Office; however, he could not remove her from the position – only voters could do that via the recall process – and placed responsibility for the office in the hands of Peterson.

Woodman was assigned to the Pima Justice Court, but staff in that court told Gila Valley Central last week that Woodman had not been seen at that court in a few months.