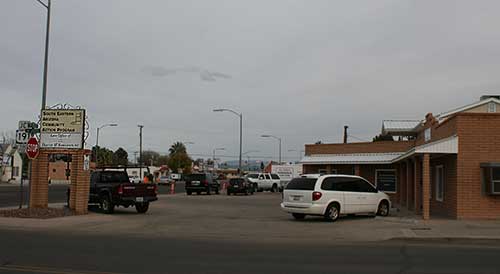 Photo By Brooke Curley/Gila Valley Central: A woman at SEACAP's office was treated at the hospital for injuries she received after a stove exploded as she attempted to light it.

SAFFORD – A woman was transported in a private vehicle to the Emergency Room at Mt. Graham Regional Medical Center for precautionary measures Wednesday after a stove she attempted to ignite exploded.

The incident occurred around 8 a.m. at the Southeastern Arizona Community Action Program (SEACAP) office at 283 W. 5th St. According Safford Fire Chief Clark Bingham, the explosion shattered the stove’s glass door, knocked its chimney on the woman and sent its vent flying out of the building into the parking lot of the OneAZ Credit Union.

The stove was described as resembling a wood-burning stove but it utilized natural gas as its fuel source. Bingham said it appeared the cause for the explosion was operator error, and that the woman likely allowed the gas to accumulate before attempting to light the stove.

“She went to light it and it blew up on her,” Bingham said.

Safford SEACAP Director J.R. Ramirez said the incident appeared to be accidental and that the gas apparently built up when it initially failed to light and blew out the glass door when ignition occurred.

Safford Utilities arrived at the scene and turned off the natural gas. The Safford Fire Department then swept the building to make sure nothing was on fire and cleared the office.

The woman suffered minor facial cuts but reportedly should make a full recovery. Ramirez said medical workers applied some surgical glue to the damaged area and released her. She was then sent home to rest.

“It was just a minor thing,” Ramirez said.

“I’m just glad that nobody was hurt any further than what they were,” Bingham said.

SEACAP provides a variety of services in southeastern Arizona and has offices in Graham, Greenlee and Santa Cruz counties as well as both northern and southern Cochise County. In Safford, it helps low-income families with utility assistance, weatherizing homes, rent and income tax preparation among other services.

With the winter season here and temperatures dropping, Bingham advised people to be fully aware of how to operate heating appliances, especially ones that utilize natural gas as a fuel source.

“Use caution and follow the operating instructions (and) be familiar when you’re using gas appliances,” Bingham said.