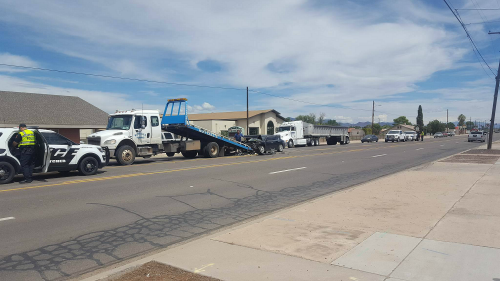 Contributed Photo/Courtesy Hannah Keir: Nuttall’s Towing loads a damaged car onto its trailer. The driver apparently failed to slow down in a school zone and collided into the rear of a truck that had stopped for a child in the crosswalk.

THATCHER – A woman was transported to the Mt. Graham Regional Medical Center (MGRMC) on Wednesday after her car collided into the rear of a pickup truck that had stopped in a school zone. The truck had stopped for a child traversing the crosswalk on U.S. Highway 70 in front of the Thatcher Middle School. The collision occurred around 12:15 p.m. 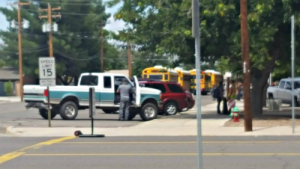 According to a witness at the scene, it appeared the car never slowed down for the school zone before hitting the truck. Witness Hannah Keir said the driver of the truck was able to pull his vehicle to the side of the road.

“My first thought was, wow, it was a good thing that truck was there because if it hadn’t stopped there, she could have ran over a kid or something,” Keir said.

According to the Thatcher Police Department (TPD), Megan Ferguson, 25, was westbound in the left lane in a 2012, Nissan Maxima when she failed to realize traffic had stopped for a child in the school’s crosswalk who was traversing the highway with a crosswalk guard. An officer told Gila Valley Central that it was an early release day for the school, and it had yet to place the 15 mph school zone crossing sign out for westbound traffic, although the eastbound traffic sign was in place.

The officer said it appeared Ferguson simply wasn’t paying attention and then crashed into the rear of the 1994, Ford F-250 pickup truck. The collision was so fierce that the Maxima slid underneath the truck and punctured its gas tank, as well as doing other damage. The driver of the truck was uninjured, according to TPD.

Ferguson was transported to MGRMC by Southwest Ambulance for treatment to her left ankle. She was said to have been in stable condition at the hospital, according to TPD. She was later given a citation for failure to control her vehicle.

The Maxima had severe front-end damage and was removed from the scene by Nuttall’s Towing. The eastbound lanes were unaffected by the crash and the far right westbound lane remained open during the cleanup.