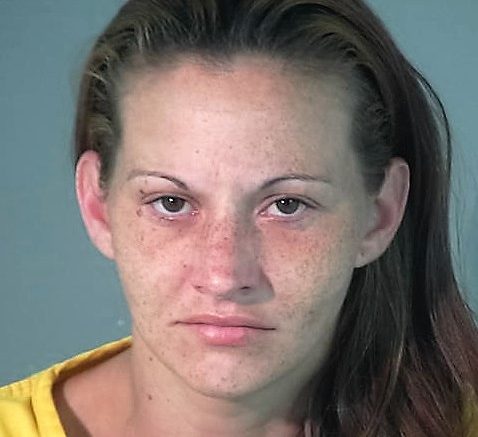 SAFFORD – A woman was found with heroin residue and drug paraphernalia after using a lavatory at Walmart on Saturday.

According to a Safford Police report, an officer performed a traffic stop on a green four-door sedan at about 3:47 p.m. for not having valid car insurance. The car pulled over into the Walmart parking lot at 755 S. 20th Ave., and the passenger told the officer she needed to use the restroom. The officer allowed the passenger to leave and proceeded to speak to the driver, Shirley Lollis, 20, of Safford.

Lollis admitted she did not have a valid driver’s license, and the officer gave her a citation for driving without a license and displaying a suspended license plate. He then asked who Lollis’ passenger was.

After learning the passenger was Dannette Penrod, 31, of Thatcher, the officer ran a check and was notified of an outstanding warrant. He then waited at the car for Penrod to return.

Upon Penrod’s arrival, the officer placed her under arrest for her warrant and asked if she had anything illegal. Penrod allegedly said she had several unused syringes in her shoe that she used to inject insulin for diabetes.

Questioning why a diabetic would carry syringes in their shoe, the officer examined the shoe and discovered a black bag with the syringes and a metal spoon with apparent burnt heroin residue. Penrod then allegedly admitted the residue was heroin and that she had shot up a couple of days ago.